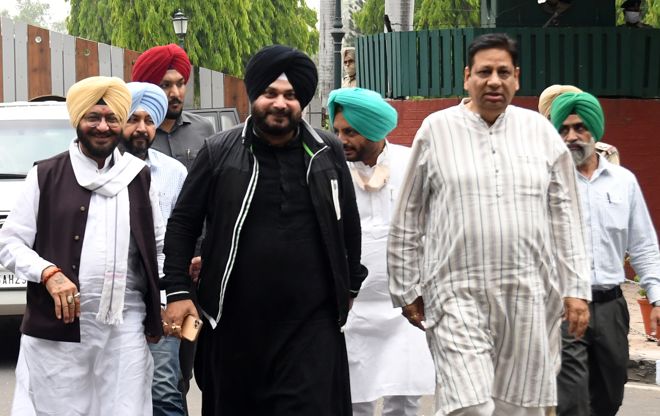 PCC ex-chief Navjot Sidhu and other party leaders in Chandigarh.

Punjab affairs incharge Harish Chaudhary landed in Chandigarh to oversee tomorrow’s event, besides meeting party leaders, in a bid to put up a united front. Though no meeting took place between the two leaders, Warring is learnt to have called up Sidhu to invite him for the event.

“Political wisdom and will by leaders close to Sidhu played a key role. Sidhu after meeting the Governor along with former MLAs Navtej Cheema, Ashwani Sekhri, Hardial Kamboj, Sunil Dutti, Pirmal Singh, Jagdev Kmalu, Sukhwinder Danny and Surjit Dhiman held a meeting with them at Cheema’s residence. At the same time, Chaudhary was closeted with Warring at the latter’s residence, located a short distance away. “There was no meeting, but things are on track,” said a source privy to the development. Party leaders are keeping their fingers crossed as when Sidhu took the reins in June last year, it took a lot of effort to bring former CM Capt Amarinder Singh to his ceremony.

In the past few weeks, Sidhu has been meeting party leaders, including those having been expelled. Last evening, he met Kewal Dhillon, who had been expelled ahead of polling for the Assembly elections. Political analyst see this as political posturing by Sidhu after being replaced as the PCC chief. A senior leader did not rule out Sidhu being roped in given the re-engagement of political strategist Prashant Kishor by the party high command.