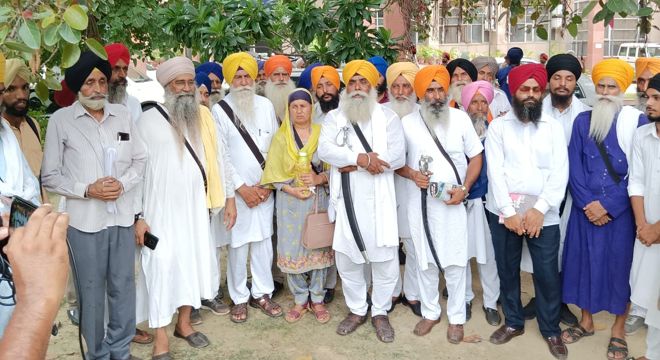 Leaders of various Sikh outfits submit a memorandum to the SSP and the DC against the alleged cutting of hair of an inmate at Bathinda jail.

Various Sikh outfits today protested against the alleged cutting of hair of an inmate at the Bathinda Central Jail.

Leaders of these outfits also submitted a memorandum to the SSP and the DC, seeking action against those responsible for chopping the hair of gangster Rajveer Singh.

Last week, too, the SGPC had condemned the incident and sought action against the perpetrators. Dal Khalsa president Baba Hardeep Singh, Lakhbir Singh from Satkar Sabha and Baldev Singh Sirsa along with scores of members from various Sikh organisations gathered near Ambedkar Chowk and took out a protest march before submitting the memorandum.

Notably, gangster Rajveer along with other inmate had allegedly beaten up the warden of the Bathinda Central Jail over a week ago. When Rajveer was produced before a local court, he, while talking to the media, had alleged harassment by the jail authorities.