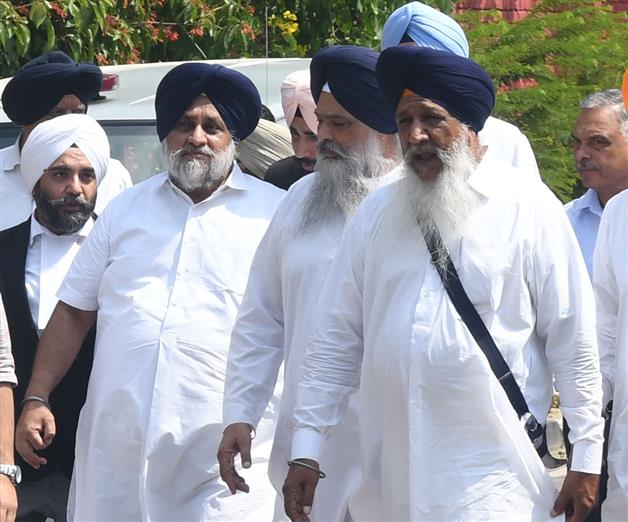 Sukhbir appeared before the SIT at 11.15 am and was allowed to leave around 2.20 pm. The hearing was held at the Punjab Police Officers’ Institute, Sector 32, here. He was grilled for his alleged role in ordering the firing at a mob.

Last week, Sukhbir had not appeared before another SIT that is probing the Kotkapura firing case of October 2016.

The SIT led by IG Naunihal Singh is probing the October 2016 Behbal Kalan police firing case, in which two men had died and several others were injured.

Sources said the SIT focused on whether Sukhbir or Parkash Singh Badal, the then CM, gave the green signal to the police to use force against a mob that was protesting against a series of sacrilege incidents in the state.

The SIT is also trying to find if the firing was unprovoked or the police had to use force when provoked or attacked by the mob.

Talking to the media, the SAD chief said the AAP government was only playing politics vis-à-vis the sensitive cases of police firing at Behbal Kalan and Kotkapura and did not seem interested in nabbing and punishing the culprits.

Asserting that the SAD and its leaders were always ready to cooperate with the SITs probing the firing cases, Sukhbir said it was unfortunate that the AAP government was only playing politics on these issues for petty political gains.

“Punjabis wanted all culprits in these cases to be caught and punished, but the AAP government is following in the footsteps of the previous Congress regime and politicising the investigation into the cases. This is extremely unfortunate, especially after the High Court has already rapped former IG Kunwar Vijay Pratap for misusing his official position to further his post-retirement political ambitions,” he added.