In Nandigarm, farmer leader appeals to voters to vote for anyone but BJP 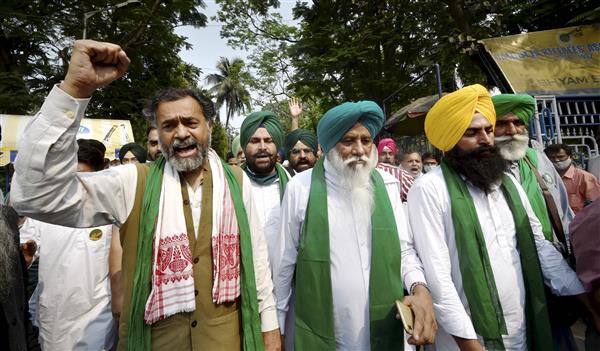 The farmers’ agitation that began with an apolitical agenda, one to get the three farm laws repealed, has turned "political" with senior most leader of the Samyukta Kisan Morcha (SKM) Balbir Singh Rajewal targeting Prime Minister Narendra Modi.

Rajewal, the most respected face of the SKM, the umbrella unit of over 40 Kisan Unions, has kicked off a political storm after saying Prime Minister Narendra Modi was a bigger threat to India than Pakistan.

Rajewal, who was addressing a gathering at Nandigram, which will see a pitched battle between West Bengal Chief Minister Mamata Banerjee and former TMC MLA and now BJP’s firebrand leader Suvendu Mukherjee, also asked the voters to vote for anyone but the Bharatiya Janata Party.

“BJP only knows vote ki Rajniti. You possess a great weapon called a vote. Please don’t give that vote to Modi. Give your vote to anyone, rather give it to a winning candidate but please don’t vote for Modi,” 77-year-old said addressing the Kisan Mahapanchayat in Nandigram on Saturday.

Bhartiya Kisan Union (BKU) national spokesperson Rakesh Tikait had also requested the voters to not vote for the BJP ahead of the SKM’s three-day campaign in West Bengal. Ironically, Tikait’s faction is called BKU (Arajnaitik).

Rajewal also touched the topic of Electronic Voting Machine (EVM) from the same stage. “There is another issue of the EVM. We are thinking of doing something about it once the Kisan Andolan gets over,” he added.

Rajewal’s outburst is part of the anti-BJP campaign currently being undertaken by the SKM in poll-bound states. On Friday, the SKM had issued an open letter to the farmers and citizens of West Bengal asking them to teach ‘arrogant government’ a lesson.

Yogendra Yadav read the open letter that would be circulated in all of the 294 constituencies in West Bengal.

“…The BJP government without consulting the farmers brought the three laws which will not only destroy our produce but also our next generations. They called us brokers, anti-nationals and even terrorists. We were peppered with water cannons, we were lathicharged and were framed in false cases. Because of all these atrocities I want your help. Elections are being held in Bengal. BJP does not bother about good or bad, constitutional or unconstitutional acts. It only understands one language that is of vote, seat and power,” the letter stated.

“Shaheed Bhagat Singh had once said we need a bomb to shake up the British. Similarly, to wake the BJP out of its slumber we need to hurt them with votes. Please do this job for me. BJP is desperate to win in Bengal. If farmers of Bengal punish them in these elections, it will teach them a lesson. If BJP loses in Bengal then it will bring down their arrogance and Modiji will be forced to hear farmers. I am hopeful that you will keep my request in mind when you go to vote,” the letter added.