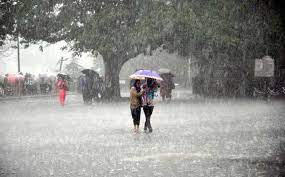 Private forecaster Skymet Weather has predicted Monsoon rains at 103 per cent (907 mm) of the Long Period Average rains for India, ranging between “normal and above normal”, with a model error of five per cent. This is the third year in succession that India may see “above normal” rains during the season. The last time it happened was in 1996, 1997, and 1998, Skymet said.

The Northwest is expected to see above-normal rains in September, the Skymet said.

The monsoon usually reaches Northwest India at the end of June.

Historically, there has been a vast difference in rain distribution over Punjab and Haryana.

This year, in July and August, the states may report "some deficiency between 10 to 15 per cent".

"However, the month of September seems to be rain surplus therefore, we do not expect any major risk in terms of rainfall over Punjab and Haryana," said Mahesh Palawat of Skymet Weather.

In September, there is a 30 per cent probability of “normal” rains and as much as 60 per cent of “above normal” rains, Skymet said. September is expected to see good rains, above 16 per cent in most parts of the country, including the Northwest.

Ahead of the onset of the much-awaited rains over the Indian mainland two key factors, La Nina, and Indian Ocean Dipole (IOD), are “softening”, returning to neutral levels. The Skymet also ruled out the possibility of El Nino, which means SSTs may remain “neutral” during the 2021 Monsoon season, meaning that it may not give a “boost” and, also not “harm” the monsoon in any way. Similarly, the IOD index is also expected to be neutral, “not affect rains in any significant manner”, during the June-September season, according to the first forecast of the season

Official forecaster India Meteorological Department (IMD) is expected to come out with its forecast for the seasonal rains on which almost two-thirds of India’s agricultural tracts depend upon for irrigation. Warmer than normal SSTs normally lead to more cloud formation and rains. In those terms, La Nina, or say a warmer West Pacific, and positive IOD, that is warmer West Indian Ocean, are indicative of good rains. El Nino or colder SSTs and negative IOD indicate otherwise.

Last year saw El Nino weakening and La Nina developing during the second half of the season, factors that gave the country rains 109 per cent of the Long Period Average, third-highest after 112 per cent (in 1994) and 110 per cent (in 2019) according to the IMD. Monsoon rains are also important for replenishing groundwater and from this season onwards the official forecaster is also planning to provide estimates of possible increase and availability of water levels in river basins and reservoirs for better water management. Ends