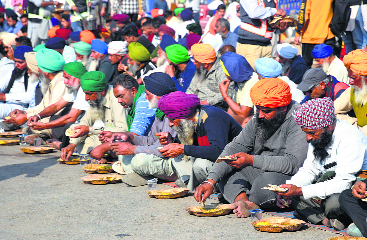 At a time when farmers are facing serious financial problems and committing suicides, their contribution to fuel the agitation against the Central farm laws has been increasing. Since the protest began, BKU Ugrahan has spent around Rs 7 crore, of which around Rs 4 crore only on vehicles.

We maintain complete transparency in records and anyone can check it. Since November 15, we’ve spent around Rs7 crore. We have never faced a financial crunch as there is generous support for us. - Joginder S Ugrahan, BKU  (ugrahan) Chief

Such a huge amount has come through donations from farmers, their families and even other residents.

“Two days back, Sanjeev Kumar from Rohtak gave Rs 45,000 to our organisations and it all came without any demand. Since we have been fighting for the rights of farmers, residents are contributing on their own,” said Jagtar Kalajhar, a BKU Ugrahan leader.

The BKU has formed committees at the village, block, district and state levels to manage separate account books and arrange funds. Apart from it, the BKU has also formed committees to regularly conduct audit of financial transactions at all levels. These committees have been maintaining the day-wise details of every penny they have collected from farmers and various expenses. Apart from figures, the state and district committees also maintain the record of men and women, who attended their protest to exactly assess their expenses.

The organisations also spent around Rs 22 lakh to arrange fans, tents, mats, food and vehicles in a day. The state panel arranges tent and sound while vehicles and rations are managed at the village level under the supervision of their block committees. The BKU (Ugrahan) leaders collect wheat,

paddy and money after every six months to generate funds for the organisation. Apart from collecting cash, they sell collected wheat under the supervision of village committee and deposit the funds in a bank.