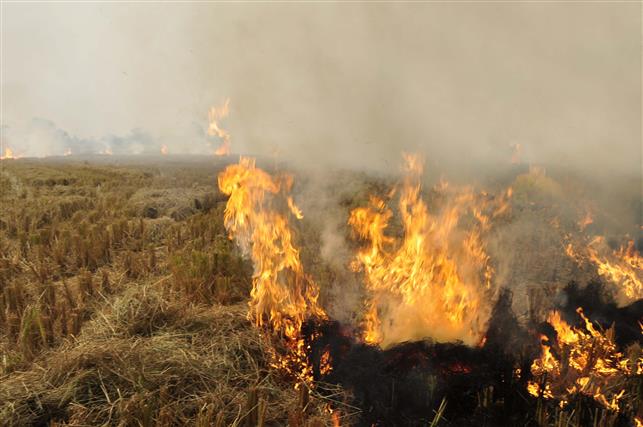 For the first time, the state government has come up with a policy on ex-situ crop residue management. The policy, which has also got the approval of the Commission for Air Quality Management, aims to sell stubble to biomass power plants, compressed biogas plants, paddy straw-based ethanol plants, industrial boilers and even turning straw into manure.

Paddy straw-based ethanol plant to come up in Talwandi Sabo and Nasibpura in February 2023. To use 2 lakh metric tonnes straw per annum

With the BJP-led central government declining to pay incentive of Rs 1,500 per acre for not burning straw — as per a proposal sent by the state government, where the Centre as well as the Punjab and Delhi governments were to give Rs 2,500 per acre to farmers for not burning paddy stubble, the ex-situ management policy could help the farming community earn some extra bucks by selling crop residue.

So far, the state government has largely focused on in-situ crop residue management and around 90,000 machines for this purpose were provided to farmers. Apart from being an expensive option, over 10 per cent of these subsidised machines remain untraceable.

Krunesh Garg, member secretary, Punjab Pollution Control Board, said, “The total paddy straw generation is expected to be 18.32 million tonnes this year. Though we expect that majority of the stubble (which is not burnt) will be managed through the CRM machines, we are encouraging farmers to switch between in-situ and ex-situ residue management.”

Garg said, “We need to give rest to the soil after fertilising it with crop residue for two years. Farmers can sell their paddy straw to companies for Rs 1.50 to Rs 2 per kg. These companies will also pay transportation costs to farmers.”

It’s learnt that the state government has been looking at utilising 1 million tonnes of paddy straw at 11 biomass projects and 1.2 million tonnes at compressed biogas projects ( three functional in Sangrur, Fatehgarh Sahib and Ludhiana and 38 expected to be commissioned in 2023-24).

At least 10 bioethanol projects were coming up in the state and the government would incentivise them if they instal paddy straw-based boilers.