The Panthic Malwa belt comprising 69 seats, known to elect the government in Punjab with whosoever gets the maximum here — lived up to its expectations. The Aam Aadmi Party (AAP) made deep inroads into this southern belt by winning 66 seats. Party's previous tally stood at 18. While two chief ministerial faces lost, another from the belt will be at the helm.

The politically-influential Dera Sacha Sauda, which decided to extend support to SAD and BJP candidates, could not make much of an impact. Its support could not turn the prospects of leaders of traditional parties, and majority of them lost by a huge margin. “We are shocked at the outcome as we had conducted our survey as well, before extending support,” said a dera man. 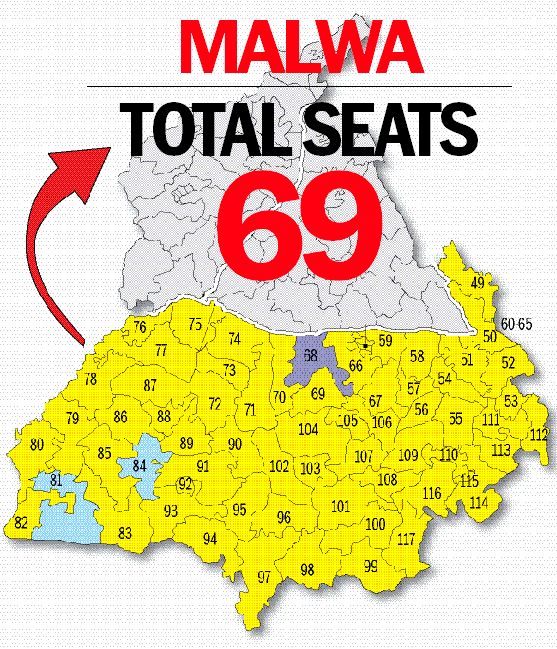 The Congress won two seats of Gidderbaha and Abohar, while the SAD won in Dakha. AAP had a clean sweep in districts of Ferozepur, Patiala, Sangrur, Fatehgarh Sahib, Barnala, Faridkot, Ropar, Khanna and Ludhiana (barring Dakha).

The Malwa belt held significance not only for the number of seats on the offing, but the fact that all three CM faces were locked in intense battles. While AAP’s Bhagwant Mann won from Dhuri, Congress’ Charanjit Singh Channi in the fray from his second seat of Bhadaur lost to AAP and Shiromani Akali Dal’s (SAD) Sukhbir Badal from Jalalabad biting the dust too. Even ex-CM Capt Amarinder Singh got swept away by AAP’s wave in his citadel of Patiala.

All through its campaign in Punjab, AAP was successful in selling its Delhi model of governance. The party’s successful projects in Delhi in the areas of education, health, power, etc., appealed to the electorate of a state reeling under a governance deficit. AAP launched dedicated campaigns and dialogues to win over traders also. “We came with a vision and ensured to talk about good governance. People accepted it with open arms. Now we will perform and turn that vision into reality,” says AAP leader Harpal Cheema, who held the party together even when majority of its leaders decided to be turncoats in the past five years.

Punjab was yearning for change even in 2017 with discontent brewing against the Congress and the SAD-BJP. However, not going into the polls with a CM face, perception of high-handedness by the Delhi high command and allegations of flirting with hardliners dented AAP's prospects. As a result, the AAP had to eventually content with 18 seats from the region.

“AAP has emerged as a substantial player in the state’s electoral politics. Without any grassroot organisational network that the SAD or the Congress has, AAP ensured it touched issues that concerned Malwa the most,” said a senior political analyst.

The Aam Aadmi Party came out with a vision for Punjab and talked about good governance. People of the state believed in it and accepted us with open arms. Now we will perform and turn the vision into reality.— Harpal Singh Cheema, AAP Leader

We accept the mandate with total humility. We will continue to serve people of the state with humility in the role they have assigned to us. I offer AAP my good wishes for success. I am sure it will live up to the people’s expectations. — Sukhbir Singh Badal, SAD President

Sangrur: Behind the landslide victory of Bhagwant Mann were the efforts of his mother and sister holding fort for the AAP’s CM candidate, who remained busy campaigning across Punjab for party candidates in Dhuri. The gentle demeanour and outreach of Mann’s mother Harpal Kaur and sister Manpreet Kaur helped connect with the electorate, which voted in large numbers for Mann. TNS

Abohar: Congress candidate Sandeep Jakhar won the election from the Abohar segment by defeating AAP’s Kuldeep Kumar by a margin of 5,471 votes in a closely contested poll. He is the fourth member of the Jakhar family who succeeded in the Assembly elections. The Akali Dal had fielded former Congress MLA Mohinder Rinwa. Sandeep got 49,924 votes, Kuldeep 44,453, BJP’s Arun Narang 21,534 and Rinwa 14,345 votes. OC 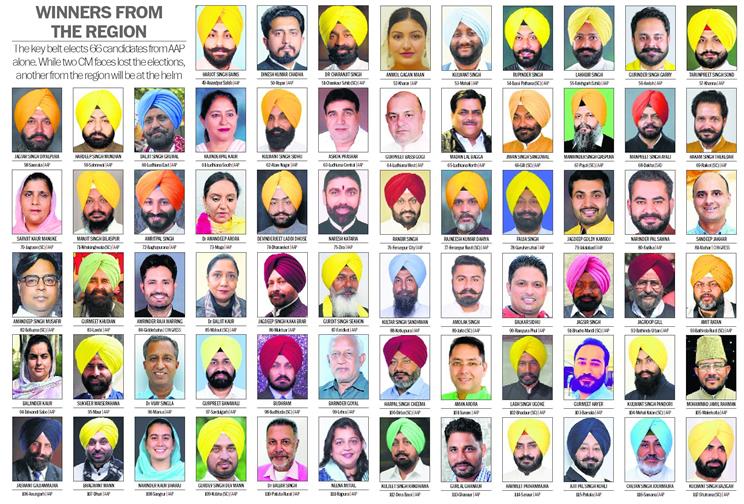