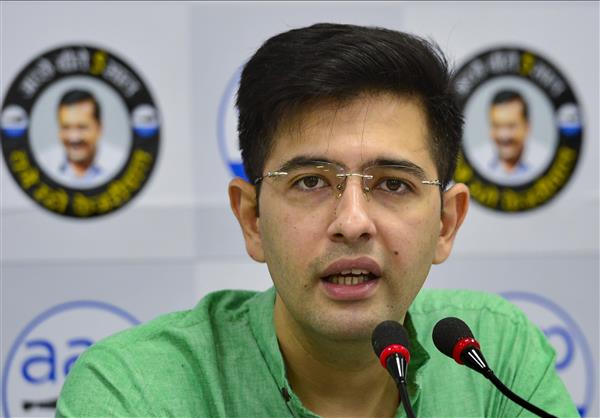 Just about a fortnight after the appointment of Aam Aadmi Party MP Raghav Chadha as the chairman of the state’s interim “Advisory Committee” was challenged, the Punjab and Haryana High Court today disposed of the petition with a direction to the state to decide a representation filed earlier in this regard.

As the matter came up for preliminary hearing before the Bench of Chief Justice Ravi Shanker Jha and Justice Arun Palli, petitioner-advocate Jagmohan Singh Bhatti argued that the appointment of Chadha was, among other things, unconstitutional.

It was also stated that the appointment amounted to government within the government and was impermissible in the law.

Responding to the submissions, senior advocate Gurminder Singh contended on the state’s behalf that the matter was considered at the Chief Minister’s level before it was sent to the council of ministers for approval. “Only thereafter the appointment was cleared. It was completely in accordance with the statute and not alien to the law,” Gurminder Singh submitted.

Taking a note of the submissions, the Bench made it clear that the state should communicate the reasons to the petitioner in response to his representation submitted to the government, if it had the reasons to defend the appointment.

Challenging the appointment on more than 20 counts, petitioner-advocate Bhatti contended that it was illegal, arbitrary and in exercise of “non est” or non-existent laws of the state and the Central governments.

Bhatti also contended that the appointment of Chadha, Rajya Sabha member from Punjab, and an “outsider not being a part of the state legislative assembly”, was also in violation of the Constitution of India.

It entailed unwarranted burden on the public exchequer, and amounted to “inviting multiple people to run the affairs of the alleged temporary and ad hoc committee to advise the dovernment of the state of Punjab on the matters of public importance pertaining to the public administration”. Bhatti added it, rather, amounted to a “parallel government within the government”, which was not permissible.