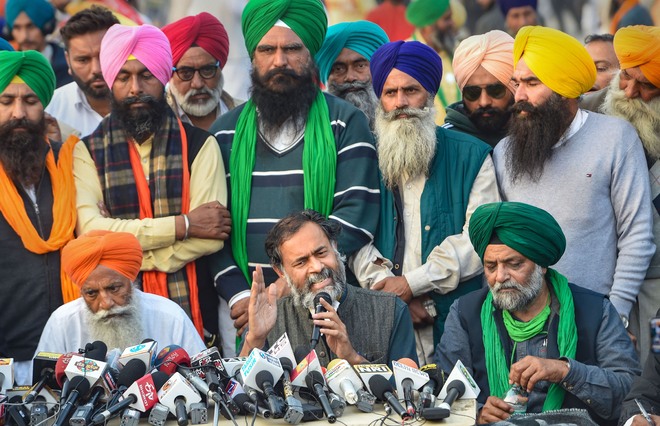 Political activist Yogendra Yadav (centre) along with farmer leaders addresses the media at the Singhu border on Monday. pTI

The AAP today urged Chief Minister Capt Amarinder Singh to take on Prime Minister Narendra Modi instead of indulging in a slugfest with Haryana Chief Minister Manohar Lal Khattar, who had unleashed force against the farmers marching towards Delhi against the three Central farm laws.

In a statement today, Punjab affairs in charge and Tilak Nagar MLA Jarnail Singh alleged the CM was playing second fiddle to the Union Government instead of supporting the farmers in this hour of crisis when they were fighting a battle against the Centre for their survival.

Hitting out at Capt Amarinder Singh, Jarnail Singh questioned him as to what were the political compulsions that he had to “kneel before the Modi government”. He said the CM should clear the air over the issue.

Jarnail Singh said the need of the hour was that Amarinder Singh should exert pressure on Modi to accede to the demands of the farmers on a priority basis, adding that he had played “dubious role” in clearing the passage for the three draconian laws.

He said had the Captain government been strong enough to resist the implementation of the laws, the Modi government could not have pushed these. The AAP Punjab in charge further said if the NDA government did not backtrack on rolling back the controversial laws, Captain Amarinder should immediately pass a Bill to make the minimum support price (MSP) on all crops a statutory right of the farmers.