The first day of the Covid vaccination drive witnessed a poor response from the frontline healthcare workers across the state.

Among the districts, Ferozepur got the coldest response. As many as 300 doses were to be given but the district could find only two healthcare workers who were ready to be vaccinated. 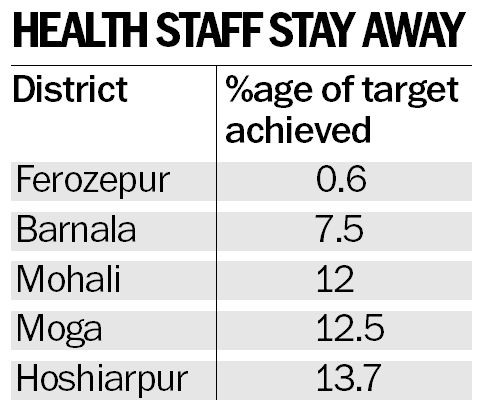 At some places, even doctors refused to take the shot, citing “questionable” credentials of the vaccine. In Mohali district, there were three centres, one each in SAS Nagar, Dera Bassi and Banur. These centres were asked to administer 300 doses but only 36 healthcare workers came forward. Among these, most were workers from private health centres. In Banur, just eight health workers came forward, all of whom were from private hospitals.

Ludhiana is the only district which could administer over 40 per cent of the doses, with 214 out of 500 coming forward. However, that too was possible as senior health officials from Chandigarh were camping in Ludhiana, said sources.

When contacted, Hussan Lal, Principal Secretary, Health and Family Welfare, accepted that the response on the first day was not as per their expectations. “There were two reasons. First, we started a little late. Second, people showed reluctance but when doctors came forward to take the shot and shared their videos, the situation started improving but by 4.30 pm, we had to wind up,” he said.