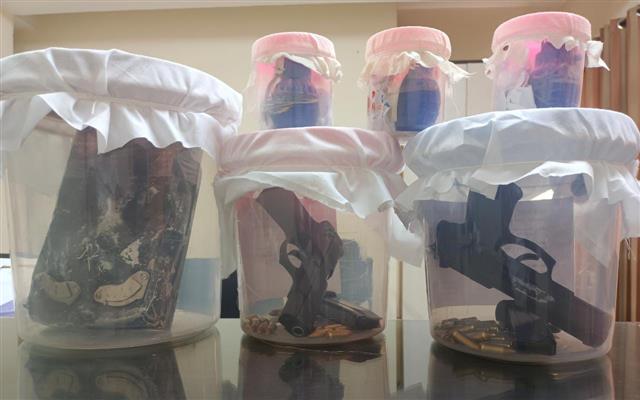 Thwarting yet another possible terrorist attack around Independence Day, Punjab Police have busted a Pak-ISI backed terrorist module with the arrest of  four members associated with Canada-based gangsters.

The accused were associated with Arshdeep Singh alias Arsh Dala and Austraila-based gangster Gurjant Singh alias Janta. They were apprehended from Delhi during the intel-led operation carried out by the Counter-Intelligence unit of Punjab Police with the help of Delhi Police.

The police have also recovered three hand-grenades (P-86), one IED and two 9mm pistols along with 40 live cartridges from the possession of arrested persons, said Director General of Police (DGP) Punjab Gaurav Yadav here on Sunday.

This is the third such module of cross-border smuggling of arms and explosives that has been busted by the Punjab Police in less than a week.

Those arrested have been identified as Deepak Sharma of Preet Nagar in Moga; Sandeep Singh of Kotkaror Kalan village in Ferozepur; Sunny Dagar of Ishapur village in Najafgarh in Delhi; and Vipin Jakhar, a resident of Goyla Khurd in New Delhi, where all of them were taking shelter.

Day before #IndependenceDay, @PunjabPoliceInd busted a Pak-ISI backed terror module with the help of #DelhiPolice and arrested 4 module members. 3 hand-grenades (P-86), one IED and two 9mm pistols along with 40 live cartridges have been recovered. #ActionAgainstGangsters pic.twitter.com/IwdFRqQEPD

Disclosing more details, DGP Gaurav Yadav said following reliable inputs that associates of Arsh Dala are being harboured by Vipin Jakhar at his accommodation in Goyla Khurd village in New Delhi, teams of Punjab Police's SSOC Mohali along with Dwarka Police conducted a raid at their premises on Friday, and managed to arrest them after recovering two 9mm pistols (foreign-made) along with 40 live cartridges.

“Working on the leads obtained during the questioning of the arrested persons, the police teams have also recovered one IED and three hand-grenades on Saturday from the locations pinpointed by them in Punjab,” he said, adding that the arrested accused also revealed that they were being tasked by Arsh Dala to execute criminal activities in areas of Delhi and Punjab ahead of Independence day to disrupt the peace and harmony.

The investigations so far revealed that Deepak Sharma is a history-sheeter and was wanted by the Punjab Police in two cases including of murder of Moga-based Jaswinder Singh alias Jassi, who was killed in March 2022 and another for firing on the house of panchayat secretary of Dala village in Moga in June 2022, said the DGP. While, accused Sandeep, who recently came back to India from Dubai, had provided logistic support to Deepak to carry out firing at the house of the panchayat secretary.

He said that accused Sunny Dagar, who is out from jail on parole, is an active member of Neeraj Bawana Gang and Tillu Tajpuriya gang active in Delhi and NCR region and has been facing various cases of heinous crimes including murder, attempt to murder, extortion, theft etc. Sunny Dagar was providing hideouts to Deepak Sharma and Sandeep Singh in Delhi and nearby areas, while accused Vipin Jakhar was providing financial and logistical support to the other arrested and was involved in facilitating the movement of the accused from one hideout to another, he added.

Meanwhile, the police have procured remand for five days of all the arrested persons after producing them at the local Mohali court on Saturday.

Process is on to extradite gangster Arsh Dala

Canada-based Arsh Dala, a native of Dala village in Moga, is a notorious gangster involved in various criminal activities in Punjab and abroad, and is most wanted by the Punjab Police. His involvement had also emerged in various targeted killings that took place in the border state of Punjab, besides, in cases of supplying militant hardware including RDX, IEDs, AK-47 and other arms and ammunition to modules in the state after getting them imported from Pakistan.

DGP Gaurav Yadav said that the Punjab Police has initiated the process to extradite him from Canada and soon he will be brought to India. Notably, the Red Corner Notice against Arsh Dala has already been issued in May 2022.