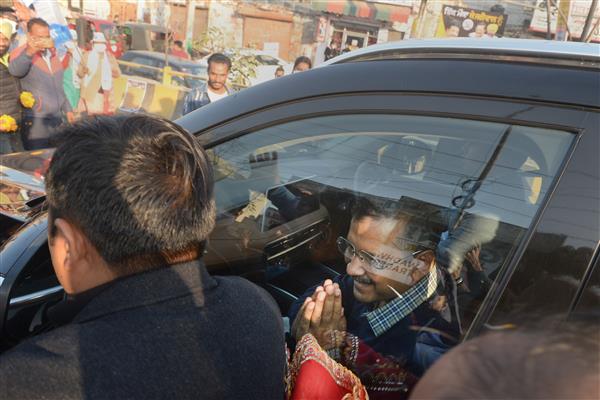 Delhi Chief Minister Arvind Kejriwal acknowledges greetings of supporters as his convoy passes through a road during his visit ahead of the Punjab Assembly elections, in Jalandhar. PTI

‘AAP’s was a “Kattar Imandaar Sarkar” and the other political parties had only duped the people, stated Delhi Chief Minister Arvind Kejriwal on Friday.

Delhi Chief Minister Kejriwal said there had been no justice in sacrilege or drugs cases in Punjab so far, because ‘everyone’ was involved ‘sab mile hue hain’ in protecting the culprits.

Targeting both the Chief Minister Charanjit Singh Channi’s Congress and SAD leader Bikram Singh Majithia of the Akali Dal, he termed the recent FIR against the SAD leader a sham and asked people whether those facing charges regarding sand mining and drugs could protect the state?

He asked people to rather opt for the AAP’s Kattar Imandaar sarkar (fiercely honest government). He stated this while addressing a gathering at the town hall in Adampur. Earlier in the day, he also addressed a meeting at Phillaur.

Kejriwal further added, “If our government comes to power, this entire network of suppliers amounting to not just one or two but hundreds — will be nabbed on a war footing. They will all be nabbed.”

He also added rehabilitation of youths and provision of employment would be part of the plan to counter drugs.

In his dig at CM Channi with regards to the ED raid, Kejriwal said, “Today allegations are being made against the state CM. That huge stacks of currency have been found in an ED raid on the CM’s relative. This is the state in three months. I wonder how much money they have all earned together. There are allegations of sand mining. On the other hand, another leader is charged with selling drugs. Tell me is the state safe in such hands?”