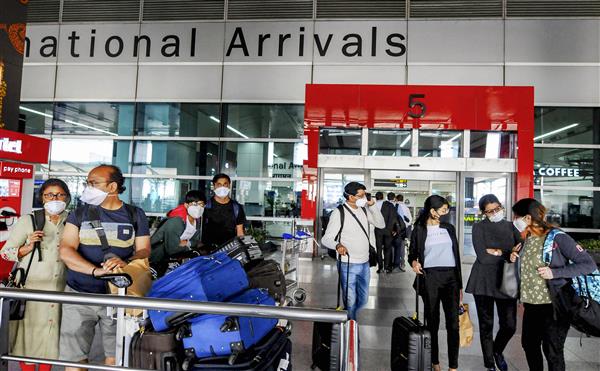 A fortnight after India decided to allow the entry of all foreign tourists following a decline in Covid-19 cases, hundreds of NRIs have come back to Punjab to attend weddings and other functions. File photo

Thirtyone-year old Shibjot (name changed) landed from Germany last week to attend a wedding in Patiala. A day later, he played a cricket match and attended a function — both without a mask. Now, he is running fever and is yet to undergo Covid test.

A family that came back from England two days ago to attend a wedding went shopping in Patiala and Ludhiana in addition to visiting all their relatives on their three-week trip to Punjab. Strangely, even the district administration or the health authorities have no information about their Covid status, as they are fully vaccinated.

From December 1, the Civil Aviation Ministry has directed all international travellers to submit 14-day travel history, negative RT-PCR report on the Air Suvidha portal as well as declare the Covid-19 test report.

A fortnight after India decided to allow the entry of all foreign tourists following a decline in Covid-19 cases, hundreds of NRIs have come back to Punjab to attend weddings and other functions. With the increased pace of vaccination and state governments relaxing Covid-19 rules, the floodgates for weddings have opened up this season, despite the threat of a new variant, Omicron.

After almost two dull seasons, the big fat weddings are back with a bang in the state. With no Covid protocols being followed, experts warn of greater risk at such events, especially with NRIs attending such events by ignoring norms.

While the Civil Aviation Ministry has released new guidelines in view of the Omicron variant, the district authorities have also advised caution to citizens in the region. With the NRIs coming to the region in large numbers on a regular basis, the state has asked the district health authorities to follow central government’s Covid norms.

OP Soni, who holds health portfolio, said, “If international travellers test positive, then their samples are to be sent for genomic sequence test and they are to admitted to a separate isolation facility, where treatment will be as per the standard protocol. If the genomic testing is found positive for the B.1.1.529 (Omicron) variant, then a strict isolation and treatment protocol is to be followed.”

“All district civil surgeons have been briefed and we will keep monitoring the NRI arrival. Laxity will not be tolerated,” he said.