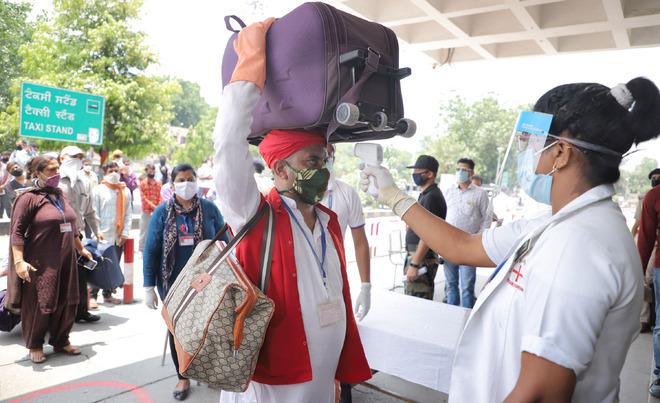 With 38 fresh cases of Covid-19 coming to the fore on Monday, the state tally reached 2,301. Apart from that, one person in Pathankot is in critical condition.

As per the media bulletin, nine cases were reported from Amritsar, eight Hoshiarpur, five Fatehgarh Sahib, four Ludhiana, two each Bathinda and Hoshiarpur and one each SBS Nagar, Pathankot, Gurdaspur and Jalandhar.

Besides, the department made a correction in the number of deaths, which has been decreased from 45 to 44 as the death of the same person was earlier counted in two districts.

In Amritsar, the district health authorities stated that while three of the fresh cases self-reported at hospitals with influenza-like illness, the remaining six are contacts of previously positive cases.

In Patiala, four persons, including an ASHA worker and two NRIs, tested positive for Covid on Monday. The NRIs had recently returned from Kuwait. They were already placed under quarantine at Gurdwara Dukhniwaran Sahib.

A woman from Shimbro village in Bhadson block of the district, who had returned from New Delhi, was the third patient to contract the virus.

The fourth positive patient, an ASHA Worker, was tested during random sampling of health workers. The official had been working at Matroda village in Bhadson block.

In Ludhiana, the four new patients included a retired Army officer, a relative of a positive patient, who died on May 29, and two other are doctors. The relative of the deceased is a 33-year-old male from Chowni Mohalla.

An 86-year-old retired Army officer had visited Mohan Dai Oswal Hospital for treatment of some other disease and when his Covid test was done, he turned positive. He is a resident of Fauji Mohalla and is currently on ventilator support.

Two more who have tested positive are doctors based in Khanna. One is 34-year-old male and the other is a 29-year-old female. Both of them are doctors at Mohan Dai Oswal Hospital and possibly contracted virus from the positive patient who got admitted there on May 28.