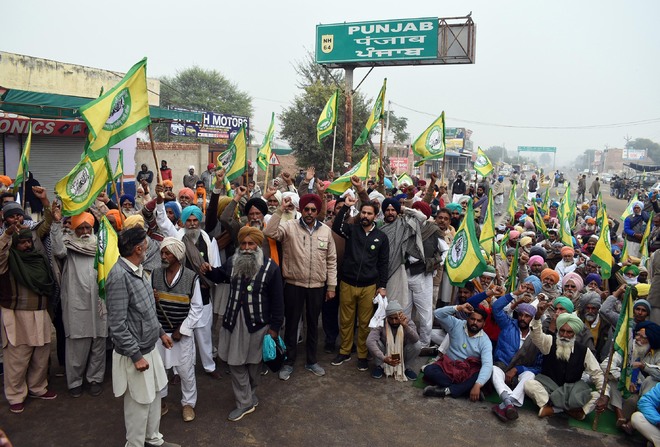 Farmers protest against the Haryana Police at Doomwali barrier in Bathinda. Pawan Sharma

Hundreds of farmers under the banner of the Bhartiya Kisan Union (Ekta Ugrahan) today embarked on the march to the national capital in response to the “Delhi Chalo” call. However, the farmers couldn’t proceed beyond the Doomwali barrier at Dabwali as the Haryana Police barricaded the Bathinda-Delhi National Highway.

One company of the Haryana Police, a water cannon and anti-riot vehicles have been stationed at the barrier and big stones have been kept on the road to stall the farmers’ march. A Haryana Police official said they had strict instructions not to let farmers enter the state.

However, firm in their resolve and undeterred by the bad weather, farmers raised slogans against the Central Government and said their protest would continue till the farm Acts were revoked. They are camping at the barrier and expected to be joined by scores tomorrow. “We are expecting around two lakh farmers from six districts in the region to reach the Doomwali barrier tomorrow. Our ‘Delhi Chalo’ march is planned from Dabwali through the Doomwali barrier and Khanauri in Sangrur,” said Shingara Singh Mann, district president, BKU (Ekta Ugrahan).

We are expecting around two lakh farmers from six districts in the region to reach the Doomwali barrier on Thursday. The March is planned through Doomwali barrier and Khanauri in Sangrur. —Shingara Singh Mann, BKU (Ekta ugrahan)

Bathinda Deputy Commissioner CB Srinivasan along with other officials visited the barrier and took stock of the situation. Commuters travelling on this route had a tough time as traffic was diverted through the link roads, which were also sealed. However, some were allowed to go after checking details.

Even farmers from Ferozepur, Faridkot, Fazilka would also come to Bathinda and are planning to enter Haryana from Talwandi Sabo, Mansa and link roads in the region. Even the members of BKU Sidhupur and Karantikari and others are planning to reach the region. They would head for Delhi tomorrow morning.

Meanwhile, the Samyukt Kisan Morcha comprising farm organisations from all over the country condemned the crackdown by the BJP-led state governments on farmers marching peacefully.

Muktsar: As Malwa farmers are expected to move towards Delhi through

Arhtiyas to go on strike

Fazilka: Arhtiyas have decided to observe strike on November 26 and 27 to express solidarity with the farmers. “No auction of paddy and cotton will be done at Fazilka grain market for two days,” said OP Setia, president, Arhtiya Association, Fazilka. OC