'Camera is not focussed when Opposition MLAs speak in the House' 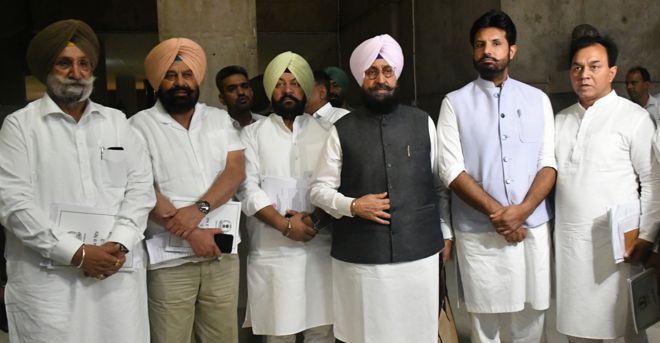 Leader of the Opposition Partap Singh Bajwa today asked Vidhan Sabha Speaker Kultar Singh Sandhwan to ensure “fair coverage” to MLAs of the ruling party and the Opposition alike during the telecast of the House proceedings.

He raised the matter during the Zero Hour and wrote to Sandhwan in this regard.

“The unfair broadcast of the House proceedings is uncalled for and undemocratic,” he said, seeking creation of a Vidhan Sabha channel on lines of Sansad TV.

The Speaker assured the House the matter would be looked into.

Meanwhile, during the Zero Hour, Jalandhar MLA Avtar Henry (Junior) said private agencies procured 73,000 quintals of moong at rates 30 per cent below the MSP. “Farmers will be dissuaded from planting moong in future if the government fails to procure the produce at the MSP,” he said.

Leader of the Opposition Partap Singh Bajwa has said Cabinet ministers and AAP MLAs are given good coverage, while faces of Opposition MLAs are not clearly shown when they speak in the House. “The unfair broadcast of the House proceedings is uncalled for and undemocratic,” he adds.