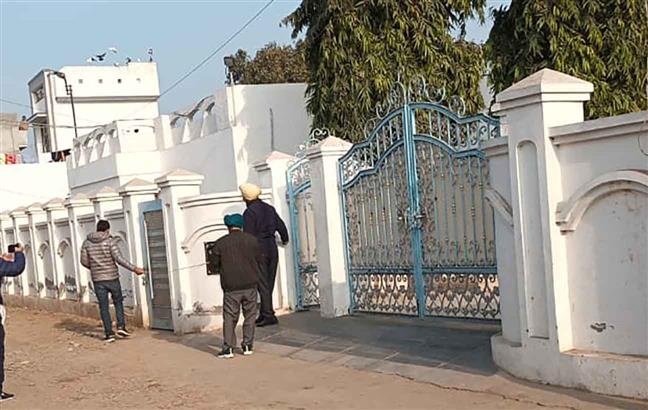 A Vigilance Bureau (VB) team today conducted a survey-cum-inspection of the palatial house of former Congress MLA from Ghanaur, Madan Lal Jalalpur, who is under the VB radar in the multi-crore panchayati fund scam. Jalalpur, who was busy with Rahul Gandhi’s “Bharat Jodo Yatra”, had returned from abroad last month.

Sources said the VB team, led by an inspector-rank officer, visited the former MLA’s house in Jalalpur and stayed there for over four hours. The team was ascertaining the value of the property as Jalalpur had allegedly amassed property through unfair means while he was an MLA in the previous government.

“We were told that a technical team of the VB wants to inspect and measure the total area. The team also surveyed the house for a few hours,” confirmed Gagandeep Jalalpur, son of the ex- MLA.

Jalalpur had also come on the VB radar after sarpanch of Aakdi village in Ghanaur Harjit Kaur was detained in August 2022. Harjit Kaur was accused of embezzling panchayat funds amounting to Rs 12.24 crore in the name of development works.

The VB had registered an FIR on May 26, 2022, under various sections of the IPC and under the Prevention of Corruption Act in Patiala to probe misappropriation of panchayat funds. “The role of several senior leaders and officials is under lens in this case as huge money exchanged hands,” said a VB official.

The bureau had stated that PUDA had acquired shamlat land measuring 1,104 acres belonging to five villages for construction of the Amritsar-Kolkata integrated corridor.

“In this regard, an amount of about Rs 285 crore was given to the five villages — Pabra, Takhtu Majra, Sehra, Sehri and Akari — in Shambu Block, Ghanaur. Of this amount, Rs 51 crore was received by the Akari gram panchayat for acquired land measuring 183 acres and 12 marlas,” the official said.

“During an inspection of development works, large amount of funds were seen passed through fake resolutions of the gram panchayat for construction of village pond, community centre, cremation ground and panchayat ghar. To show that the works were carried out, she released payments through cheques to the firms,” the official said.