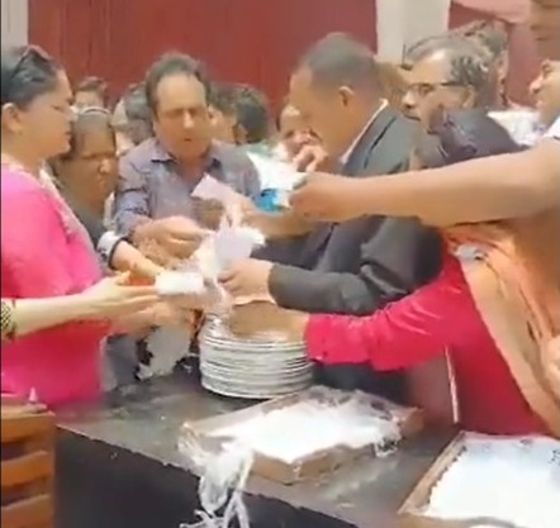 When the meeting got over, the venue witnessed a huge ruckus, where teachers were seen getting agitated while grabbing plates for food. Videograb- Twitter/@ManishPangotra5

The Democratic Teachers’ Front (DTF) has slammed the decision to initiate action against seven school heads for allegedly circulating a video of “plate-snatching” at lunch during a Chief Minister’s function.

The front said instead of teachers, who returned hungry, the action should have been taken against the officials who failed to make adequate arrangements for lunch and seating. DTF president Digvijay Pal Sharma and state general secretary Sarwan Singh Aujla said the Punjab Government has no moral authority to hold school heads responsible for the mismanagement of a government function. The fact is that in the meeting which proved to be a widely advertised show, the management did not show any sympathy towards the seating arrangements of the esteemed school heads.

They lamented hundreds of highly educated school principals had not even got a seat in the meeting, let alone a meal. Union leaders said it was not raised in any of the sting operations that school heads of the host district themselves left their seats to accommodate the guests from other districts. They further added that the meeting was limited to formally announcing a link to a Google sheet for suggestions from school principals. No dialogue was held on the occasion.