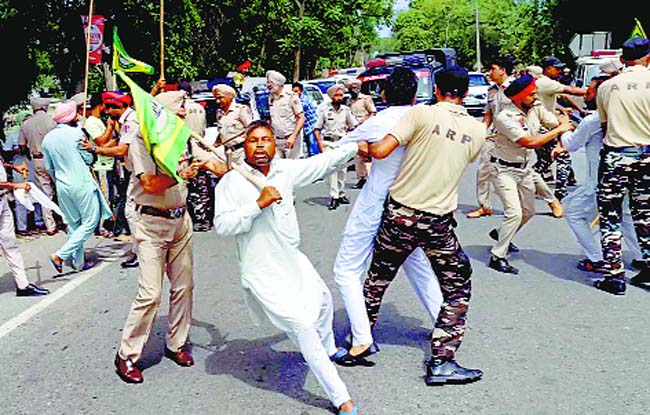 Sampla’s convoy was passing through Talwandi Sabo when farmers started a protest on the road. The situation became tense when the police used force to remove the farmers. As per information, Sampla was to go to nearby Dadu village in Haryana to meet HSGPC president Baljit Singh Daduwal.

The farmers, who later gathered under the leadership of BKU (Ugrahan) block president Binder Singh Jogewala, accused the police of using force and slammed the administration, saying the government in Punjab was hand in glove with the BJP. It is learnt that due to the protest, Sampla, instead of going to Dadu village, diverted towards Sirsa in Haryana and his meeting could not take place today. The Haryana Police have filed an FIR against 21 persons by name and 600-700 unidentified persons for staging a protest outside Daduwal's residence. — TNS

Anandpur Sahib: A large number of farmers staged a protest when senior BJP leader Madan Mohan Mittal visited Rampur Jhajjar village on Saturday. The farmers blocked the way and allegedly hit Mittal’s car with sticks when he was leaving the spot after holding a meeting with BJP workers around 6.30 pm. tns