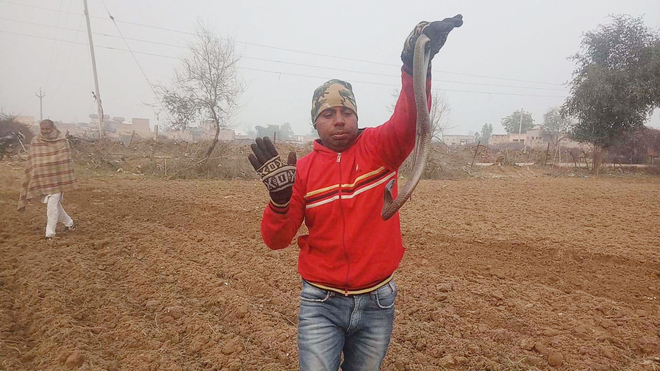 A farmer carries a snake near Abohar. TRIBUNE PHOTO

Keeping in view that the animals are also at the receiving end of the dense fog and bone-chilling wind on the first day of year 2020, volunteers of SSG Green Social Welfare Force rescued a calf that had slipped into Malukpura minor sub-canal and a puppy from a waste water drain at Dhinganwali village in Abohar.

In an unprecedented incident in the sub-division, Surinder Kumar, a farmer, noticed a snake shivering in the corner of his field at Tajapatti village and feared it would die due to cold climatic conditions.

He then sought help from a passerby, Binder Singh, a farmer, of Seed Farm Colony, who readily agreed.

Binder arranged for woodfire immediately, and carried the snake near the fire so that it can get some much-needed warmth.

As soon as the snake showed some signs of movement, Binder released it in a hole that the snake had dug for itself for shelter purpose.

The pictures taken by the other farmers have been doing the rounds on mostly every social media platforms since late evening.