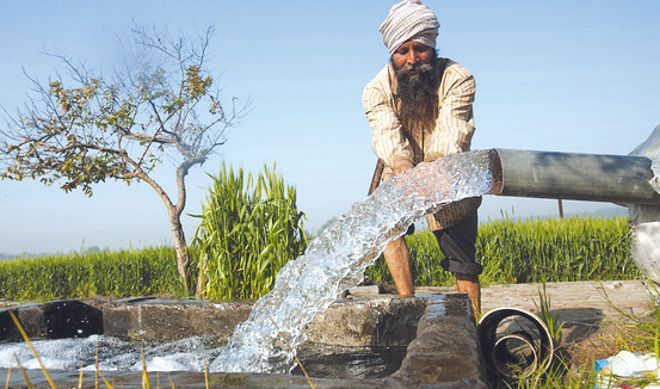 A year ago, Joginder Singh of the district’s Samra village used to spend 70 to80 days watering his fields. Furrows in his fields were large and the amount of water consumption was high. In a period of 12 months, he has reduced the water input drastically while making money out it.

Thanks to the state government’s Pani Bachao Paisa Kamao scheme, farmers have started realising that fields can be irrigated with less water.

So, how has this change come about? Trained by teams of World Bank, farmers have been taught techniques on how to reduce water usage. For this, underground pipes have been laid, sprinkler systems have been installed and width of furrows has been reduced.

“The techniques taught by World Bank teams have massively reduced water consumption. We keep the fields moist and reduce water used for irrigation during rains. Hence, water input has been reduced from 70 to 80 days to the 15 to 20 days now,” Joginder Singh says.

In return, the government has disbursed subsidies amounting to Rs42,75,723 to Doaba farmers under the scheme, which was launched in June 2018. In all, 175 farmers in Doaba are enrolled under the scheme.

In Doaba, the scheme operates via three electricity feeders — Bambiwal-1, Nawajipur (both in Jalandhar) and Dhanoya (Hoshiarpur). The Phase I of the scheme was started in six feeders; the other three are in Fatehgarh Sahib district.

In all, 16 demo farms were set up in Doaba supported by the PSPCL and experts from The Energy and Resources Institute (TERI) and PAU, among other agencies.

The demonstration farms have become a point of convergence for government schemes on agriculture, soil and water conservation and electricity.

Jagdish Singh, whose field in Chakwal village was one of the demo farms, said: “The water input has reduced drastically, while the yield has been good. Farmers now realise how much water was being wasted. Several farmers in Dohanoa, Samra, Muradpur Jattan, Chak Bal and Jhangi Mai Shah village are learning the water conservation techniques and enrolling themselves under the scheme.”

Apoorva Bamal, project associate of the Doaba leg of the scheme, said: “Depending on the horsepower of a feeder, different limits have been set for farmers per feeder. For example, the limit for Dhanoa feeder is 160 units per bhp per month (for paddy season). Any farmer consuming less than the stipulated limit is compensated at the rate of Rs4 per unit for every unit they save. The installation of metres is the ongoing process. The farmers are responding enthusiastically.”