Weaving their own stories

At the time when employment avenues are dwindling and the pandemic is forcing downscaling of businesses, rural women in Punjab are exploring traditional skills and turning these into economic opportunities 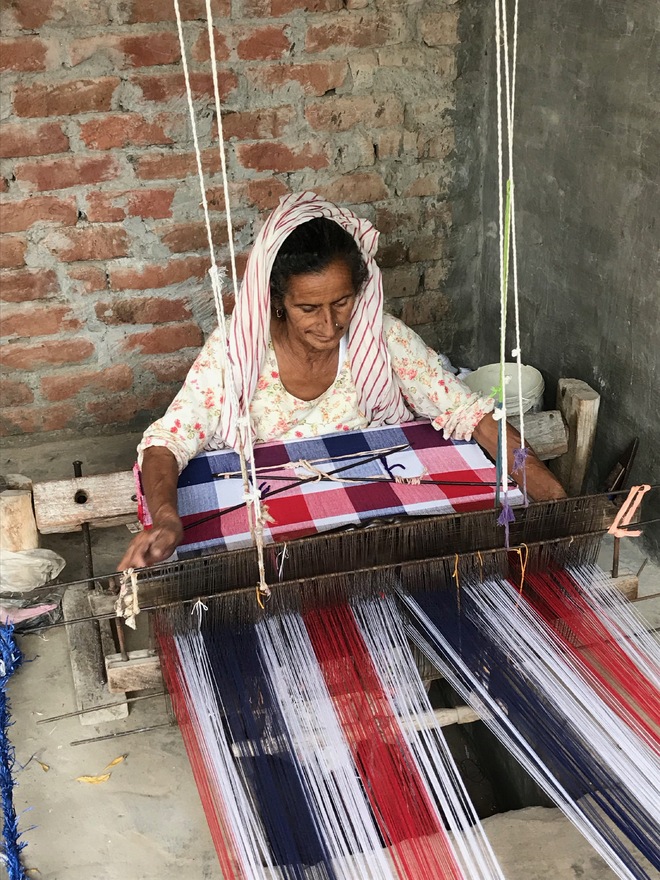 Gurcharan Kaur’s skills in weaving have helped her take care of the family after her son’s death.

IN the narrow, winding lanes of the industrial city of Ludhiana, 62-year-old Chann Kaur proudly displays her ‘hathh da kamm’. Specialising in handcrafted handbags, she embroiders motifs like flowers, leaves, birds and butterflies on bedspreads, pillow covers, etc. Craft came naturally to Chann Kaur, and it helped her when she wanted to supplement her meagre family income. She took to making handbags of different shapes and sizes. After years of grind, she is now comfortable financially. Even during the pandemic, she was making four to five bags and wallets each day.

For 60-year-old Gurcharan Kaur, a weaver from Kotliablu in Gidderbaha tehsil of Sri Muktsar Sahib district, however, it was Project Trinjan, an endeavour by the Kheti Virasat Mission (KVM), a non-government organisation, that came to her rescue. She was hard up financially after an accident left her young son critically injured. When her son succumbed to his injuries, she hardly had any source of income. Gurcharn’s skills in weaving brought her hope. She is now able to earn her livelihood, and even manages to provide for her grandchildren.

Traditionally, Trinjan has been a space of togetherness, collective wisdom and shared skills — the space where women from villages gathered to spin a charkha, besides doing embroidery, weaving, knitting and crochet. This would be ‘their’ time — they would weave cloth, make durries, sing songs as well as narrate stories. They would talk, listen, learn, empathise and exchange bits of information from centuries-old knowledge and belief systems. Impromptu folk song renditions and folk-dance performances automatically helped preserve and safeguard folk culture. This was a symbol of women’s identity, freedom and creativity, and it helped them keep their emotional, cultural, ecological and societal connect intact. Over time, these spaces of togetherness started shrinking. Private spaces closed doors and enclosures became more common. Mechanisation, Green Revolution, individualism — the changes were too strong to be withstood.

The agro-ecological crisis, degeneration of environment and depleting soil health has once again brought back the focus on traditional spaces and sustainable lifestyle. Dr Davinder Kaur Dhatt, an art and culture expert who works in a premier rural educational institution in Ludhiana, points out: “Trinjan used to be a cathartic experience for women who would embroider, knit, weave as well as freely talk about their family life. They would make traditional specialties like seviyaan and wadiyaan and also share their culinary experiences with other women. All this got lost in decades of mechanical lifestyle. The pandemic has, at some level, forced us to rethink our values and priorities. A revival of community life, with its shared creative experiences, is on the anvil. ”

Many non-government organisations are working towards women empowerment through the revival of traditional art and craft and skills. The Pingalwara Charitable Society, an organisation started by Bhagat Puran Singh in Amritsar, has been on the forefront of reviving Trinjan as a display of Punjabi traditional arts among the young. Competitions like charkha spinning, embroidery and weaving have been organised to acquaint young girls with these traditional arts and crafts that have been almost lost to the young people. “Our traditional wisdom enjoined women to be conversant with right food combinations and nutritional value of seasonal foods. It was a holistic approach, unlike the present-day focus on fragmented lifestyle,” says Dr Inderjeet Kaur, chairperson of the Pingalwara Charitable Society.

Another such attempt is Project Trinjan of the Kheti Virasat Mission, which has within its ambit 300-odd women from 12 villages of Faridkot, Barnala and Sri Muktsar Sahib districts. Says Rupsi Garg, associate director of the KVM: “Women are important stakeholders in any family, society or nation. After the Green Revolution, chemical agriculture dominated and women did not find much space in this highly mechanised and market-dependent agriculture. Gradually, the culture of mutual learning and sharing started vanishing.

“We need to organise these artisans and make sure that they get regular supply of raw material and regular income out of it so that they don’t have to look for any other work alternatives throughout the year,” says Garg. On an average, the women are able to make Rs5,000-Rs6,000 per month while working for four to five hours a day at their convenience, she adds.

Despite restricted mobility during the pandemic, most women artisans earned well, thanks to support from informal community groups as well as such social organisations. The volunteers handheld women artisans by providing them the required raw material at their homes. The finished products were again picked up by the volunteers, thereby minimising the Covid risk to artisans.

Fiftyfive-year-old Sarabjeet Kaur Chaina’s job is that of field coordinator for various villages around Faridkot and Sri Muktsar Sahib. She coordinates and networks with women artisans whose expertise is making durries, spinning, weaving, basket-making etc. “Traditionally, if a woman (while making any art/craft/food item) ever got stuck at any step, another woman would chip in with suggestions, advice and help,” says Sarabjeet. “Women spinners are provided with pesticide-free raw cotton. Though the weavers do not require any formal training, yet from time to time, they are given suggestions on improving the finesse of the cloth they weave, ” explains Sarabjeet. She adds, “Meri income de naal naal meri pehchaan ban gayi. Koi vi mainu mere maa-baap de naam de naal nahi jaanda, na mere bacheyaan de naam naal (I got financial independence as well as my own identity).”

From a space of vulnerability, weakness and isolation to a space of strength, togetherness and sharing, women are reclaiming their right to traditional skills. And in the process, giving a fresh lease of life to values like sharing, caring and compassion. Of course, economic empowerment is a natural and happy concomitant!

When 23-year-old Ramandeep Kaur spins her charkha, she feels relaxed and rejuvenated. Her stress ebbs away. A graduate in Computer Applications, Ramandeep took to spinning barely four years back.

It started as a hobby that slowly became a part of her life. Now, nothing can wean her away from her charkha!

Spinning has been almost a tradition in Ramandeep’s family that passed on, by default, from grandmother to mother to daughter.

Ramandeep now wants to pursue spinning as a profession. She was in for a pleasant surprise when the volunteers from various social organisations approached her. She was given ‘work’ that not only gave her an opportunity to pursue the subject of her interest but also brought in money.

This shy and reticent girl from Sri Muktsar Sahib takes pride in her passion for ‘hand-spinning’. Most girls of her age are not conversant with the art of hand-spinning nor are they inclined to learn it. But she is happy contributing her bit to the revival of traditional art and craft.

Flowers, barks, trees, leaves are the raw material from which 18-year-old Rimpy Kaur extracts dyes. With a degree in Fashion Technology, this girl from Kotli village in Sri Muktsar Sahib is an avid advocate of natural dyes for fabrics. She uses all-natural plant materials to make dyes for the thread. She has experimented with marigold flowers, carrots, onion skin, babul tree bark (gum Arabic), pomegranate skin, and eucalyptus bark. The process of making natural dyes from barks of babul and eucalyptus trees takes a little over a month. She explains: “Soak the bark for a month. Bring the water to a boil. After boiling the water, strain the bark out and put the thread (to be dyed) into the water. After two to three hours, bring this to a boil again. Finally, pull the thread out and rinse it with fresh water.” Natural dyes are better for the skin and these help to reduce skin irritation and infections, says Rimpy. She plans to take up natural dyeing of fabrics as a commercial venture. “People visit my house to see the clothes being dyed naturally. They find it hard to believe that all the colours used are derived from plants and that no chemicals have been used. The natural colours are light and beautiful while being skin friendly. These colours have no harshness, she adds.