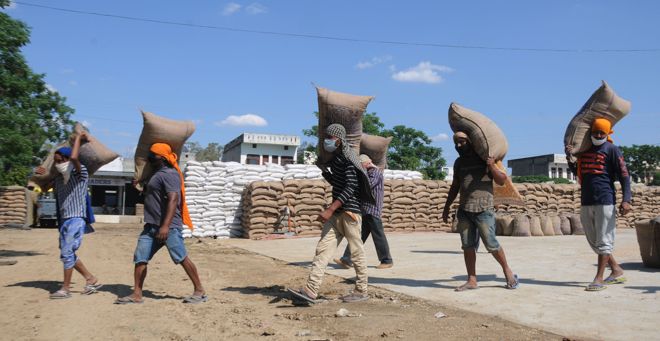 The daily arrivals have come down to 1 lakh metric tonne. Malkiat Singh

As wheat arrivals begin to dip, it is becoming apparent that procurement will fall far short of its target of 132 lakh metric tonne (LMT).

The daily wheat arrivals have come down to 1 LMT, indicating that the total procurement figures might not even touch the 100 LMT mark. To date, 95.62 LMT of wheat has been purchased in the state. On Thursday, just 1.02 LMT wheat arrived in mandis, and figures show that daily arrivals are falling sharply.

This might prove the worst fears of government to come true — sharp fall in wheat production because of the impact of an intense heat wave in March. Wheat yield has fallen by five quintal per hectare.

Unlike other wheat-producing states such as Uttar Pradesh, Madhya Pradesh and Rajasthan which have made profits by selling off wheat to private traders, Punjab has not been able to cash in on the situation.

Though Punjab has witnessed the highest ever purchase of wheat by private traders at 5.19 LMT, it is abysmally low as compared with private purchase in other wheat-producing states.

Private traders in Punjab have purchased wheat between Rs 2,025 and Rs 2,050 per quintal, while in UP, Rajasthan and MP, farmers have sold wheat up to Rs 2,200 per quintal.

In Punjab, the highest rates given by private traders have been in Sangrur, Ludhiana and Patiala.

“It is the animal feed makers as well as flour mill owners who are buying wheat this year. Flour mill owners have bought wheat from Punjab this time, instead of buying it from UP,” said Harbans Singh Rosha, a commission agent in Khanna.

Naresh Ghai, president, Punjab Roller Mills’ Association, told The Tribune that this time, about 3 LMT of wheat had been bought by flour mills from Punjab mandis. “Earlier, we bought wheat from UP, where it was sold below the MSP. But this time, the rates in UP are higher than the MSP because of entry of private players,” he added.

Cash credit limit extended till may

The RBI on Thursday extended the cash credit limit (CCL) for Punjab up to May 2022 for the wheat procurement season. The CCL of Rs 3,378.15 crore has been extended till May-end. With this, the sanctioned limit of Rs 24,773.11 crore for April-end has been enhanced to Rs 28,151.26 crore up to May end, said a govt spokesperson. TNS