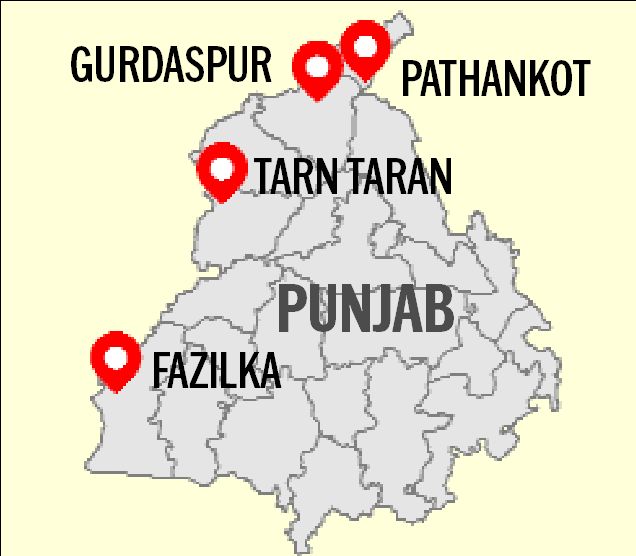 Unabated illegal excavation of white sand in sensitive border villages of the district has been continuing for nearly two decades allegedly with political patronisation.

The district is known for high quality white sand and has remained in controversy for illegal excavation. Leaders have allegedly made huge profits through the trade and have shown scant regard for ecology.

The issue is once again in focus with the BSF raising the matter of illegal mining in the Punjab and Haryana High Court yesterday by terming it a major security hazard. District mining officer Vinod Suthar says there is no security threat to the country, but admitted that mining used to be earlier carried out in villages situated near the International Border. The border villages where mining continued for years are Hastan Kalan, Mauzam, Nawan Salemshah, Gaganke, Badha and Amir Khas, and the area from where the Sutlej changed its course in the past.

In Fazilka, there is no legal quarry. All five were shut a few months ago. Sources said the sand mafia selected remote sites to excavate sand at night and it was sold in other areas, including neighbouring states.

Fazilka Deputy Commissioner Himanshu Aggarwal said the Environment Impact Assessment Report was being prepared and would be submitted to the government in three months.

Meanwhile Pathankot Deputy Commissioner Harbir Singh said, “I have asked mining officials to prepare a report on mining, if any, and submit it in three days.”

His Gurdaspur counterpart Mohammad Ishfaq said apart from seeking a detailed report, he had asked mining officials to work in tandem with the BSF to check illegal excavation of sand and gravel.

“I have requested the DIG to pinpoint the exact places where excavation is taking place. I have assured him that immediate action will be taken against people engaged in illegal mining. We have already registered eight FIRs in 10 days,” said Khakh.

An officer said mining was banned during the monsoon (from July 1 till September 30). “Contractors have stocked mining material in dumps at various places. Only this material is being transported and no fresh digging is taking place,” he said.