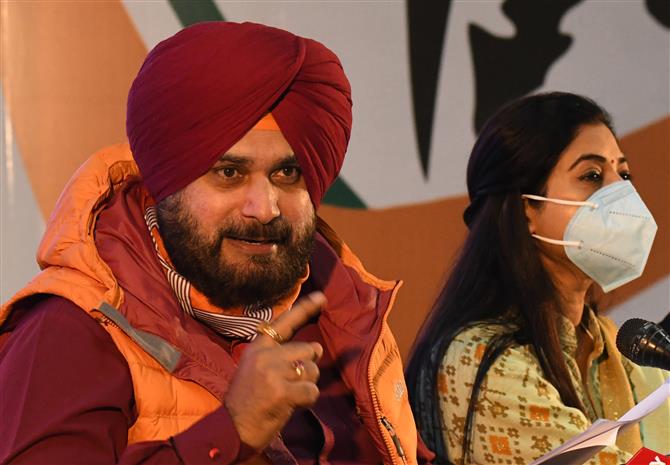 Punjab Congress chief Navjot Singh Sidhu, at a press meet here today, said unlike former CM Capt Amarinder Singh he would not be vindictive towards those indulging in anti-party activities.

“I have never issued a show-cause notice to anyone. We are a family and will sort out all issues,” he stressed.

He was replying to queries on Congress’ Kapurthala candidate Rana Gurjeet Singh openly opposing the party candidate in Sultanpur Lodhi, Navtej Cheema. Rana Gurjeet is campaigning for his son Rana Inder Partap Singh, who is contesting as an Independent. His teams are holding meetings with various panchayats to enlist support for his son. In a dig at Captain, Sidhu said some persons had expected revolt in the Congress after the candidates were announced. “But we have already announced 86 candidates and the remaining will be declared in a day or two,” he mocked. Releasing a five-page document on his ‘Punjab Model’ to empower the youth, he said college girls would be provided electric scooters manufactured in Ludhiana — one of the industrial clusters to be developed across the state. Mohali would be developed as an IT hub. Interest-free loans would be provided to young entrepreneurs.

Sidhu said industrial units would be free to purchase power from anywhere in the country and the PSPCL would transmit the power for a fee.