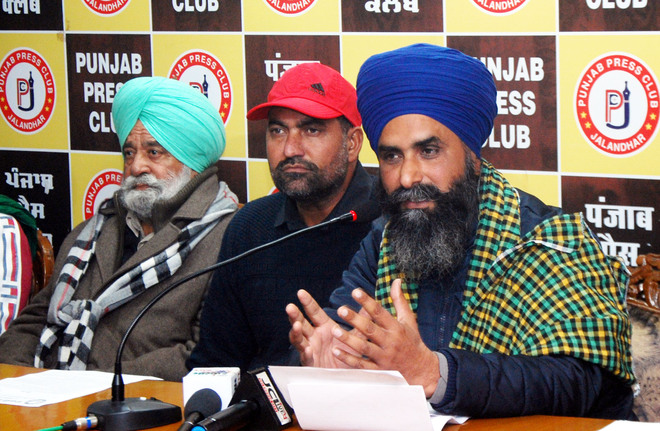 A BKU (Rajewal) activist addresses the media in Jalandhar on Sunday.

Members of the Bhartiya Kisan Union (Rajewal) today threatened to block major roads in Jalandhar and hold protests at BJP leaders’ residences if an FIR against those accused of dumping cow dung at the entrance to party leader Tikshan Sud’s house wasn’t withdrawn by January 6.

Union members said the farmers’ act was in response to BJP leaders’ alleged inflammatory statements amid a growing number of deaths at the Delhi border. An FIR under Sections 452 (trespass after preparation for hurt), 506 (criminal intimidation), 323 (voluntarily causing hurt), 307 (attempt to murder), 148 (rioting) and 149 (unlawful assembly) of the IPC had been lodged against a Dal Khalsa member and several unidentified protesters. The protesters had taken exception to Sud’s reported statement that “most farmers were unaware of farm laws and were going there on a picnic”. Kulwinder Singh, union’s district general secretary, said: “BJP leaders have been making repeated statements about farmers amidst loss of lives at the Delhi border.”

“We give an ultimatum to the state government to withdraw the FIR lodged under Section 307 and other grave offences against farmers at Hoshiarpur by January 6 or we will block roads in Jalandhar. In the coming days, we will bring such tractor-trailers to BJP leaders’ residences regularly.”

“In the middle of deaths at Singhu, if a leader says farmers go there on a picnic then it is bound to cause anger. We do not approve of the farmers’ act either. But in a democracy, an attempt-to-murder FIR can’t be lodged for dumping dung. We are not scared of FIRs. We just want peace in the state. But the government, rather than acting against the minister for provoking farmers, has lodged an FIR under serious offences,” he said.

Hoshiarpur SSP Navjot Singh Mahal said: “The FIR was lodged on a complaint received by the police. An SIT has been formed and is looking into the matter. Action will only be taken as per sections that merit the act by protesters. If any sections are found unwanted, these will be removed.”

On his part, Sud said his statement had been taken out of context. “I’m from farming background and haven’t said anything against farmers. Everyone has the right to protest. But we are against those who in the garb of protest trespass on to people’s homes. The farm leaders had never asked people to dump things on residential premises.”