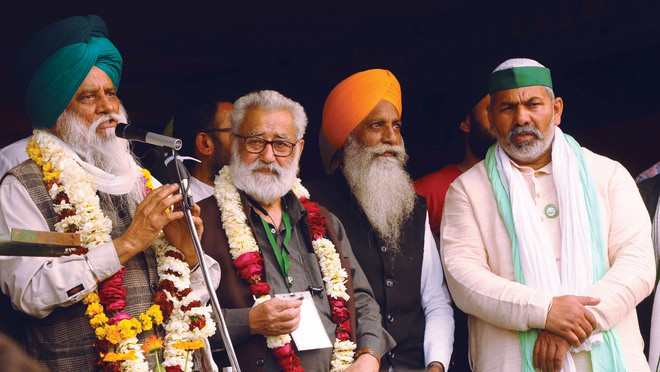 This was the feeling of a majority of the 22 farmer unions, all part of the Samyukt Kisan Morcha (SKM), who met at an undisclosed destination at Samrala in Ludhiana today.

Of the 32 kisan unions that are part of the morcha, only 25 had been invited for the meeting, following differences between BKU Rajewal president Balbir Singh Rajewal and BKU Sidhupur chief Jagjit Singh Dallewal, threatening the historic unity of 32 farmer unions of Punjab.

Seven constituents of the SKM — Krantikari Kisan Union, BKU Krantikari, Azad Kisan Committee Doaba, BKU Sidhupur, Lok Bhalai Welfare Insaf Committee, Ganna Sangharsh Committee Dasuya and Jai Kisan Andolan — had not been called for the meeting, and at least three others reportedly could not make it because of “prior commitments” and “felicitation functions” to commemorate the win of the year-long struggle.

These seven unions held a separate meeting today. Jagjit Singh Dallewal of the BKU Sidhupur told The Tribune that their meeting was not called to discuss the political scenario in the state or to extend political support, but only to chalk out the plan for their march to Harmandar Sahib in Amritsar on Friday, to pay their obeisance.

Sources say during discussions on the scheduled meeting of SKM representatives with the Centre on the issue of assured minimum support price next month, the role of the farmer unions in the upcoming elections was also taken up at the meeting of 22 unions called by Rajewal.

A majority of leaders reportedly gave a feedback that the unions should not support the traditional political parties, “as people are fed up with their inability to keep promises and misgovernance”, a union leader present at the meeting told The Tribune.

Sources said the recent verbal public spat between Rajewal and Dallewal was also discussed. Efforts are on by some farmer leaders to soothe “frayed nerves”, and ensure the SKM does not split. A meeting of all 32 kisan unions has now been called on December 18 at Mullanpur (Ludhiana) to resolve all issues and take a joint decision on the political foray of the kisan unions, said Prem Singh Bhangu, president of the All-India Kisan Sabha.