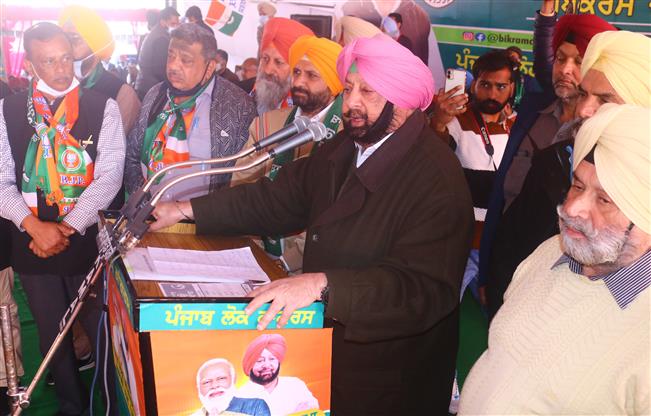 In a yet another attack on the Congress over the nomination of Charanjit Singh Channi as the CM face despite his nephew’s arrest over illegal sand mining, Punjab Lok Congress chief Capt Amarinder Singh today said he would not retire till he rid the state of such “corrupt” people.

The ex-CM expressed surprise at his former party fielding MLAs allegedly involved in the mining mafia and termed it a “clear endorsement of widespread corruption” in the party. Stating that he had decided to ally with the BJP in the interest of peace and security in Punjab, Capt Amarinder expressed concern over the threat from across the border as well as the sacrilege incidents.

Addressing a series of public meetings in support of PLC candidate from Sanaur Bikramjit Inder Singh Chahal, son of Capt Amarinder’s associate and adviser BIS Chahal, the former CM pointed out Channi’s nephew, arrested by the ED, had reportedly admitted that the Rs 10 crore seized from his possession was earned from illegal sand mining as well as transfers and postings. “How can Channi then claim to be a poor aam aadmi?” he said. —