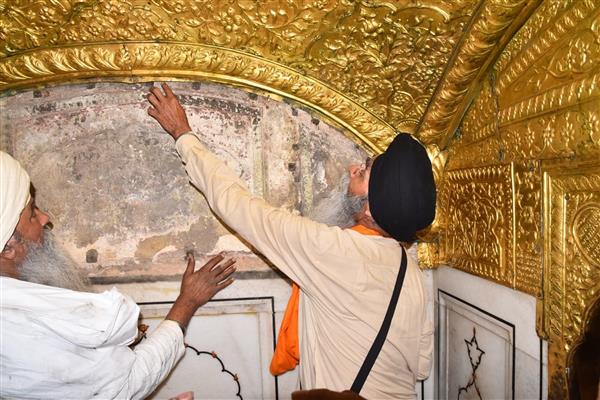 In a first, the original gold sheets installed during Maharaja Ranjit Singh era on the inner walls of the sanctum sanctorum of the Golden Temple, are being repaired and cleaned by the UK-based Sikh organisation.

With the passage of time, some portions of the gold sheets not only lost their sheen, but also developed cracks.

For the 22nd consecutive year, volunteers of the Birmingham-based Guru Nanak Nishkam Sewak Jatha who had been annually cleaning the outer gold plating, travelled from the UK to Amritsar to perform the “kar sewa”.

Maharaja Ranjit Singh-era gold sheets lasted for over 150 years before they were replaced in 1999. As per information, the Maharaja had got the gold plating done between 1803 and 1830.

It’s for the first time that the inner gold plating would be repaired, whereas the outer gold plates were replaced between 1995 and 1999.

SGPC chief Harjinder Singh Dhami said mohrakashi (frescoes) enamel and glass cut work on the plates would be replicated as per the original pattern. “The repair work will be done with utmost care so that the originality does not gets tinkered,” he said.

Bhai Inderjit Singh of the Nishkam Sewak Jatha said gold plates were being dismantled to monitor the health of the wall. “After removing the gold plates, ‘Nanakshahi’ bricks were found intact. As the plaster has worn out, we will redo it to strengthen the base of the wall. Similarly, the gold sheets, which developed small cracks will be repaired and freshly coated. The ones, beyond repair, will be replaced with identical fresh sheets,” he said.