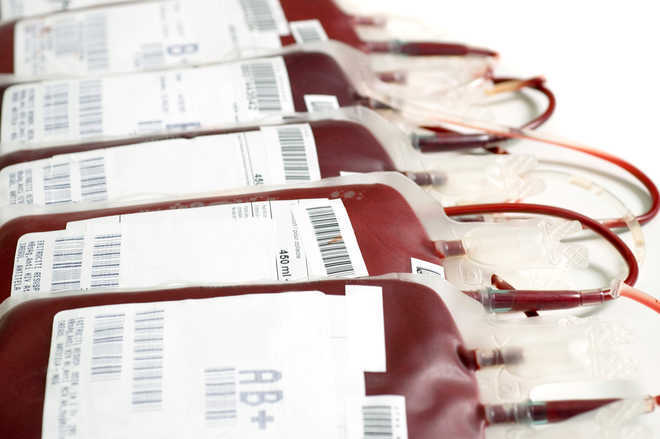 The Bathinda police have registered a case against one employee of the blood bank in the wrong blood transfusion incident at Bhai Mani Singh Civil Hospital, whereas the probe committee had indicted three employees for negligence in the incident.

Local NGO Naujawan Welfare Society has alleged that in this incident of gross negligence no police action has been taken against two blood bank employees and there is no reference of a woman who was given HIV positive blood in May. It also announced that to provide justice to the victims, the NGO through its counsel HC Arora would file a case in Punjab and Haryana High Court.

The case has been registered against Baldev Singh Romana, Medical Laboratory Technician (MLT) Grade-1 at Blood Bank at Civil Hospital under Sections 269, 270 of IPC at Kotwali police station on the complaint of Civil Surgeon.

In the complaint, it is stated that on October 3, a seven-year-old thalassaemia patient was given blood from a donor who was HIV positive and accused Baldev knew about it.

In front of probe committee, Baldev Singh had claimed that he did not call HIV positive person to donate blood. However, the committee during the probe found out that Baldev Singh was not having cordial working relations with Blood Transfusion Officer and his colleague MLT Richa Goyal. To allegedly settle personal score with them, on October 1, Baldev dialled the HIV positive donor from his mobile phone and called him to civil hospital for blood donation, the probe claimed.

Bathinda SSP Bhupinderjit Singh Virk said, “We have acted as per the complaint we have received from Civil Surgeon. Police will probe in the matter and if required more sections or persons will be added to the FIR.”

In gross negligence, a seven-year-old girl and a woman were given blood of an HIV positive person in two separate incidents at Civil Hospital.

Health and Family Welfare Minister Balbir Singh Sidhu had ordered formation of a probe committee. A three-member inquiry committee was constituted by the Health Department, which in its report found the employees guilty of gross negligence.

Acting on the report of an inquiry committee in connection with the wrong blood transfusion incident at a hospital here, the Director, Health and Family Welfare Department, has issued orders suspending three employees’ blood transfusion officer Dr Krishma Goyal, and medical lab technicians Baldev Singh Romana and Richa Goyal for the negligence.

The Civil Surgeon has written to the SSP seeking an FIR in this incident and also asked for necessary legal action.