Devoid of chills and thrills, this spy drama fails on many counts even as the characters come across as caricatures : The Tribune India

Devoid of chills and thrills, this spy drama fails on many counts even as the characters come across as caricatures 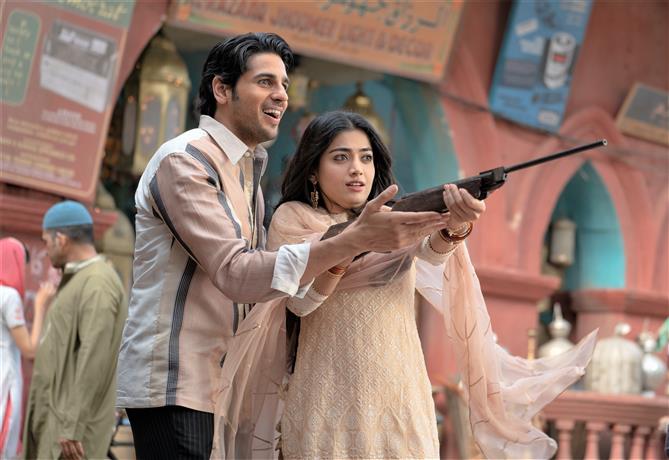 Spy dramas have been the staple of OTT platforms. As Netflix drops a new spy thriller starring Sidharth Malhotra and Rashmika Mandanna, set in 1970s, expectations are sky high. Only a few moments into the film, frustration sets in. The narrative takes us to neighbouring country, for isn’t Pakistan the ground where our spies should be. The provocation for our RAW agents to be in proactive mode is that Pakistan is about to make a nuclear bomb.

Sidharth Malhotra as Amandeep Ajitpal Singh, is the undercover agent, living life of a pious Muslim Tariq Ali, even falls for Pakistani Nasreen and marries her too. But if the Indian-Pakistani love angle and the fact that Nasreen is visually challenged have been roped in create emotional heft, the emotional appeal leaves you cold. As does a lot more.

How Amandeep along with two other undercover agents, Kumud Mishra as Raman Singh and Sharib Hashmi as Aslam Usmaniya, bust the clandestine plan of Pakistan is meant to provide us thrills. Only the movie falters time and again. Writing lacks bite and so do the spies. Sidharth Malhotra, who impressed us so much as brave-heart martyr Captain Vikram Batra in Shershaah, despite his immense likeability, can’t find his groove. Neither direction nor writing provides him support to make us truly root for him. Rashmika Mandanna though seemingly misfit for the Urdu-speaking Pakistani Nasreen stands her ground. Sharib Hashmi who has done such a brilliant job as an indigenous spy in The Family Man is wasted. So is another talented actor Kumud Mishra.

Then we have a whole lot of actors such as Rajit Kapur playing Pakistani Prime Minister Zulfikar Ali Bhutto, ISI chief, General Zia Ul Haq and more. Though the film brings forth real people such as the first chief of Indian intelligence agency, RAW, RN Kao and Pakistani physicist AQ Khan, everything looks contrived. It’s not just Pakistani characters who come out as caricatures. Zakir Hussain as the Indian handler of the spies is over the top and annoys you with his constant jibes and comments against Amandeep. By the way our hero has a tragic back-story.

After having watched The Spy on Israel’s top Mossad spy Eli Cohen and our very own The Family Man, this covert mission comes a cropper on screen. There are a few customary action scenes, but at no point does Mission Majnu provide adrenaline rush; not even in the climax where it gets its pace right.

Supposedly inspired by true events, only you keep wondering where the inspiration is? As far as misnomers go, Mission Majnu takes the cake with neither the obsessive zeal of Majnu nor the sophistication of a mission well accomplished.