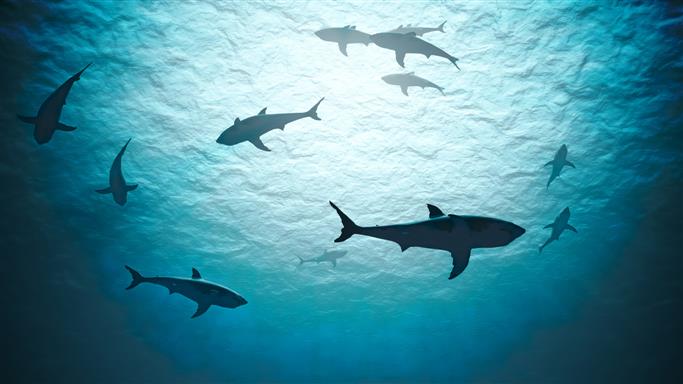 The Wildlife Conservation Society (WCS) is launching a new 10-year strategy to save the oceans' remaining sharks and rays in 10 unique shark hotspots around the world.

Called the 10x10 Shark Strategy, the effort, launched on World Oceans Day that falls on June 8, will focus on 10 countries over the next 10 years that are strongholds for surviving populations of iconic sharks and rays, such as mantas, hammerheads and reef sharks -- all of which play key roles in maintaining healthy marine ecosystems.

These are species in critical decline -- new studies show these slow-growing predators are one of the most threatened vertebrate groups on the planet, with open-ocean sharks having declined over 70 per cent in the last 50 years.

The primary threat to sharks is from unsustainable fishing pressure. The biological characteristics (low numbers of young, slow breeding and long time to maturity) of many shark species make them inherently vulnerable to overfishing, and this threat is exacerbated by a lack of species-specific management.

This management gap is particularly problematic in low-income ocean-dependent countries, which also include many of the world's largest shark-fishing countries.

The core of WCS's global shark work from 2020 to 2030 will focus on overcoming this management gap. WCS will demonstrate that comprehensive policy reforms and their implementation at a country-wide level, which are informed by robust research on shark populations and fisheries and implemented through locally-relevant practical approaches, can reduce overfishing of some of the world's most threatened species and eventually lead to population recovery.

Said Luke Warwick, Director of WCS's Sharks and Rays Program: "If we don't act now to protect them, we will lose many shark and ray species forever in the coming decades. With sharks still mostly unprotected in much of the world, the WCS will be working in all of our focal sites to take action now to prevent extinctions, and allow sharks and rays to start the slow journey to recovery." The shark hotspots targeted by the WCS span the globe, and include Indonesia, Gabon, Mozambique, Argentina, Bangladesh, and Papua New Guinea, among others.

While work in the core sites is underway, the WCS will continue to scope and develop additional shark programs, with the aim of moving well beyond 10 countries in the coming decade.

Some of this work has already begun and is showing success. One example is within the biodiverse Gulf of Guinea in Gabon, where the WCS has worked with the government to set laws that protect all threatened sharks and rays, and ban commercial trade in their products.

During 10 years of work on sharks and rays in Gabon, the WCS has identified 69 species in the country's waters, highlighting the diversity that these measures will help preserve.

To achieve this, the WCS will take an integrated approach, achieved through a holistic program of work that focuses on management reforms in three priority areas in each country or region: protecting species, managing fisheries, and controlling trade.

Said Warwick: "Our overall vision is that sharks and rays are effectively protected and sustainably managed, delivering ecological and socio-economic benefits to people and ecosystems." IANS