70 per cent of world's tiger population is in India : The Tribune India

70 per cent of world's tiger population is in India

Nation to take lead in capacity-building, management of tigers in 13 tiger-range countries 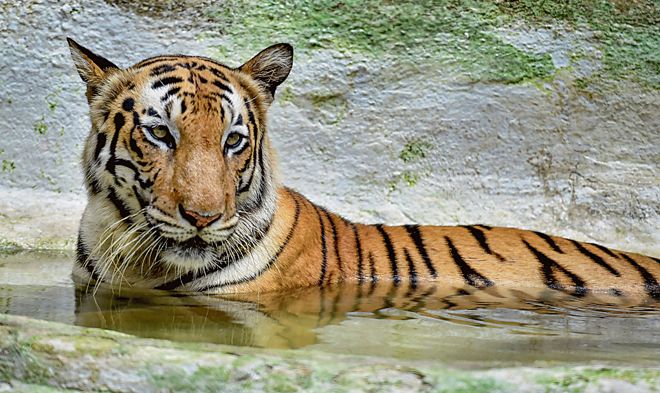 Environment Minister Prakash Javadekar on Tuesday said India, home to 70 per cent of the world tiger population, would take the lead in capacity-building and management of the wild cats in 13 tiger-range countries.

India has also decided to take up the ambitious water and fodder augmentation in forests to further improve its flora and fauna, which Javadekar called the “soft power” of the country. “India is proud of its tiger assets. These are our natural wealth. This is our nature. India today has 70 per cent of the world’s tiger population.

“We are in a leading position and ready to work with all the 13 tiger-range countries in their training and capacity-building… in their actual management of tiger reserves and their nurturing. India will take a leadership role,” he said.

Javadekar said at the same time, this had happened despite India’s physical constrains. “This is not only about tigers, we have more than 30,000 elephants, more than 500 lions, more than 3,000 single-horn rhinos, thousands of crocodiles and dolphins… We have large amount of flora and fauna, which we are proud of, our effort is to improve it further,” he said.

India, he said, had also decided to take the ambitious water and fodder augmentation in forests using technology.

“It will give complete details of forest area where water conservation can be done so that water base increases through recharge; ample grass and fodder are available, there is good prey base and there are more tigers and all kinds of wildlife. It will also reduce the incidents of man-animal conflict,” he said.

India now has nearly 70 per cent of the global tiger population and 50 tiger reserves. None of them are of poor quality, according to Javadekar.

Apart from setting a new world standard, the results validated India’s efforts in tiger conservation. The country’s tiger population increased by roughly one-third, from 2,226 in 2014 to 2,927 in 2018 following efforts that included better corridors between isolated pockets of tiger territory, reduced poaching and building up prey numbers through habitat restoration.