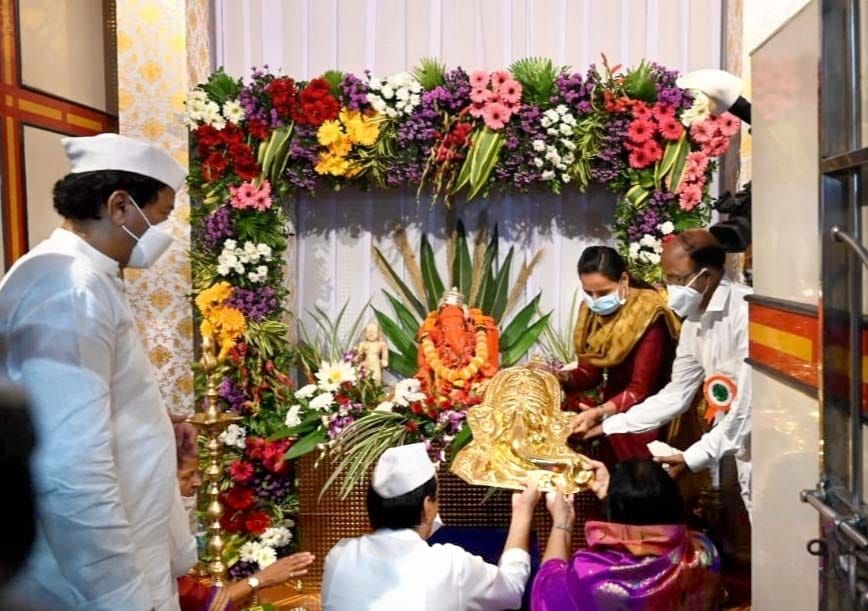 On the auspicious Angarki Chaturthi on Tuesday, the famed 'Golden Ganesh Temple' Diveagar here got back its gold idol, which was stolen in a daring temple heist after killing two security guards in March 2012.

The temple's prime attraction, the golden idol was sorely missed by devotees and tourists who throng this sleepy, picture-postcard coastal village dotted with coconut and betel-nut plantations or mango and cashew-nuts orchards, from all over India.

On November 23, Deputy Chief Minister Ajit Pawar, other ministers, elected lawmakers, villagers and the temple trustees formally anointed the idol — recrafted from the gold of the original stolen one that was melted by the thieves to escape detection.

The Suvarna Golden Ganesh Temple, in the lazy fishing village of Diveagar, around 175 kms south of Mumbai has an interesting history, said a local activist Mangesh Rane.

It was on the propitious day of Sankashti Chaturthi in November 17, 1997, when a woman digging in a local farm hit something solid in the ground.

With the help of other villagers, they carefully dug around 2-feet deep and discovered an old copper chest buried there with some inscriptions in ancient Sanskrit.

The excited villagers opened the presumably ancient box and found an old gold idol of Lord Ganesha weighing around 1.50 kgs and another 300 gms of gold jewels.

Once the capital of the Shilahara dynasties which ruled parts of the coastal and western Maharashtra in the 8th-10th century, the discovery of the box was linked to a 'Tamrapatra' found at the same farm location, dating to an old era, though there are no known official records.

Considering themselves 'blessed', the villagers decided to build a temple, installed the gold idol there and it soon became immensely popular, catapulting Diveagar on the tourist and pilgrim maps.

"As the former Raigad Guardian Minister, I had sanctioned Rs 3 crore for the temple construction. It is one of the most beautiful and revered temples in Maharashtra," Nationalist Congress Party MP Sunil Tatkare told IANS after the ceremony.

However, in March 2012, tragedy struck in the form of a gang of dacoits who swooped on the temple at night, assaulted the two security personnel (who died later during treatment) and decamped with the Lord Ganesh idol.

The issue sparked off a massive political row, figured in the Maharashtra Assembly leading to the suspension of Opposition legislators, 13 from Shiv Sena and one of the Bharatiya Janata Party, for a ruckus in the House.

As pressures mounted from various quarters, the Maharashtra Police set up crack probe teams and managed to nab the dacoits from Aurangabad and other parts of the state.

Later, the villagers learnt with shock that they had melted the original Lord Ganesh idol, and the police also recovered the entire gold within a couple of months.

After a series of hiccups, administrative and other issues, over the years, a new idol was created from the original gold and installed ceremoniously at its rightful location Tuesday.

Hundreds of villagers became emotional as Ajit Pawar and his wife Sunetra performed the rituals along with the temple priests for their long-elusive and revered idol glittering inside the cool dark sanctum sanctorum.IANS