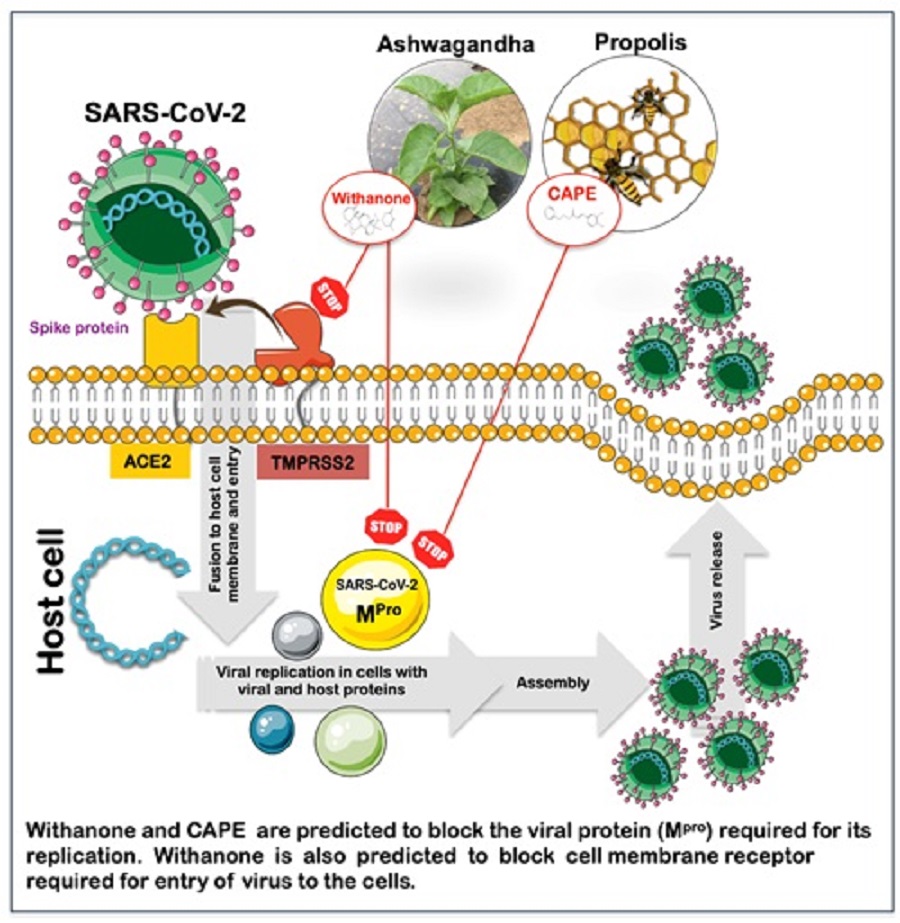 Remdesivir, Hydroxychloroquine, Lopinavir, Ritonavir, APN01 or Favilavir are being tested in clinical trials across the globe. No therapy has been found to be effective against COVID-19 as of now. However, natural compounds from Ashwagandha (Withania somnifera) and Propolis could be potential drug candidates against COVID-19. It is revealed in a collaborative study of DAILAB at Indian Institute of Technology (IIT) Delhi and National Institute of Advanced Industrial Science and Technology (AIST), Japan.

DAILAB is an international laboratory formed out of the collaboration between the Department of Biotechnology (DBT) and the National Institute of Advanced Industrial Science and Technology (AIST), Japan. The acronym DAILAB stands for DBT-AIST International Laboratory for Advanced Biomedicine. DAILAB has been working on natural compounds from Ashwagandha and Propolis for the past several years. It has explored the possibility of some of their bio-actives to interact with severe acute respiratory syndrome-CoronaVirus-2 (SARS-CoV-2). This study has just been accepted for publication in the Journal of Biomolecular Structure and Dynamics.

The researchers targeted the main SARS-CoV-2 enzyme for splitting proteins, known as the Main protease (Mpro). Mpro plays a key role in mediating viral replication. This is an attractive drug target for this virus, and as humans don’t naturally have this enzyme, compounds that target Mpro are likely to have low toxicity. They discovered that a natural compound Withanone (Wi-N) derived from Ashwagandha and Caffeic Acid Phenethyl Ester (CAPE), an active ingredient of New Zealand Propolis, has the potential to interact with and block the activity of Mpro.

Researchers have also studied the capability of these bio-actives to modulate the protein on the surface of human cells, to which SARS-CoV-2 binds and allows its entry into our cell - the transmembrane protease serine 2 (TMPRSS2), and selected Withanone. The study is currently under review and is expected to be published in the near future.

The traditional medicine system ‘Ayurveda’ has been practised for thousands of years in India. Unlike modern medicine, the mechanism of action of natural drugs has not been resolved so far.

These findings may not only connect to save time and cost required for screening anti-COVID-19 drugs, but also offer some preventive and therapeutic value for the management of fatal COVID-19 pandemic, and hence warrant prioritized validation in the laboratory and clinical tests. The drug development may take a while and in the current scenario, these natural resources (Ashwagandha and Propolis) may offer some preventive or even therapeutic value, say researchers.

Although both the natural compounds are easily available and affordable, one has to be cautious about the content of bioactive ingredients. CAPE, though a major component of Propolis, its amount and stability are critical factors that could be managed by generating its complex with cyclodextrins. This has been described earlier by the DAILAB team. Withanone, on the other hand, varies with geography/parts/size of the Ashwagandha plant. So, in order to acquire or appreciate particular effects, we must use the right and quality-controlled extracts.

Prof D Sundar, Coordinator of DAILAB at the IIT, Delhi, and Head of the Department of Biochemical Engineering and Biotechnology at the IIT, Delhi, said, “The traditional medicine system ‘Ayurveda’ has been practised for thousands of years in India. Unlike modern medicine, the mechanism of action of natural drugs has not been resolved so far. The IIT, Delhi, and AIST researchers have been working together for more than a decade and trying to contribute to strengthen this avenue by merging the traditional knowledge with the modern technologies.”

“While well-trusted reputation of Ashwagandha as an immunity enhancer forms a basis of the recent initiative of the Government of India in forming an Interdisciplinary Task Force (joint initiative of Ministry of AYUSH, Ministry of Health and Family Welfare, Council of Scientific and Industrial Research (CSIR) with Indian Council of Medical Research [ICMR]) and launch its clinical research studies related to SARS-CoV-2 and the COVID-19 disease, the current research report of this team provides hints on its direct anti-viral activities”, added Prof Sundar. India Science Wire