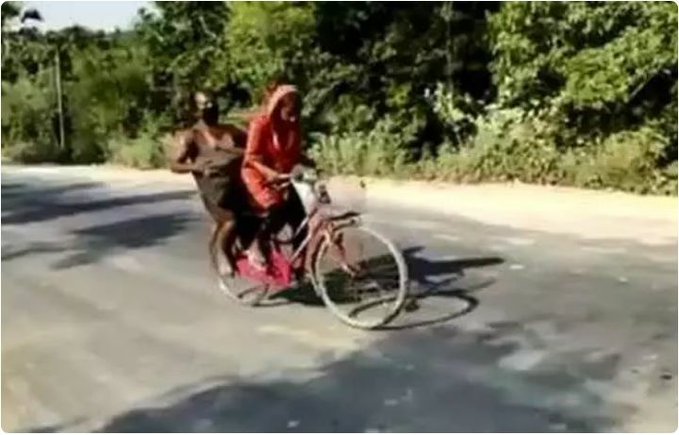 The Bihar government has chosen "bicycle girl" Jyoti Kumari, who had pedalled 1,200 km from Gurugram to Darbhanga taking her injured father on the rear carrier during the nationwide lockdown, as the Brand Ambassador for an anti-drug abuse programme, an official said.

The state government has selected the 15-year-old "real life hero" to sharpen its campaign against the use of narcotic drugs and intoxicants by youths, Dayanidhan Pandey, Director, Social Security Directorate, told PTI on Saturday.

"We could not have got any better choice than the girl who displayed exemplary courage to fight the adversity. Youths are falling prey to drugs and she will inspire them against the practice," he said.

The official visited the girl's village in Darbhanga on Friday to appoint her as the brand ambassador of the programme and also gave a cheque of Rs 50,000 to her. Kumari will be propagating the central government's National Action Plan for Drug Demand Reduction (NAPDDR) for 2018-2025 in Bihar. The programme formulated by the Ministry of Social Justice and Empowerment aims at reduction of adverse consequences of drug abuse through a multi-pronged strategy.

"She will visit schools and colleges across the state to make youths aware of the ill effects of drugs and other forms of intoxicants," Pandey said.

The young girl expressed happiness after being selected for the role. Stranded at Gurugram in Haryana due to lockdown, Kumari asked her father to sit on the rear carrier of her cycle and took him to his native place in Bihar, covering 1,200 km in seven days in May last year.

It had drawn praise from US President Donald Trump's daughter and senior White House adviser Ivanka Trump, who had termed it as a "beautiful feat of endurance and love". The Cycling Federation of India had invited her for a trial, but she declined the offer saying she wished to pursue studies. PTI