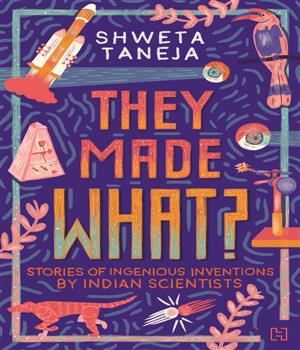 'A biologist who smashed cancer cells', 'a space scientist who sent a rocket to Mars', or 'an ecologist who stumbled on a rare species of frog', an upcoming book will educate children about the daring discoveries and ingenious inventions of India's brightest scientists.

"They Found What/They Made What", published by Hachette, is written by fantasy and science-fiction author Shweta Taneja. The children's book, done in a unique two-in-one format, will hit the stands on National Science Day - February 28.

"When I went looking for masterminds of science in India, I found so many that I was overwhelmed... We decided upon the inventions and discoveries that twisted our toes and made us agog with wonder.

It features rousing stories of renowned scientists, including the likes of Sonam Wangchuk, owner of over 400 patents; Anil Bhardwaj, winner of the 'Outstanding Achievement Award' from ISRO; Venkatraman Ramakrishnan, winner of the Nobel Prize in Chemistry and Vijayalakshmi Ravindranath, head of the Centre for Neuroscience, Indian Institute of Science, Bangalore.

Apart from groundbreaking discoveries, the book also offers activities, quizzes, easy experiments and cool tips for the young ones, rekindling their interest in science in a rather entertaining and exciting way.

"Do all scientists wear lab coats? Where do they get their genius ideas from? How do they transform these brainwaves into life-changing inventions? Do scientists never fail at Maths? What tools and technologies do they use to uncover something new?," are some of the many interesting questions the book claims to answer. PTI