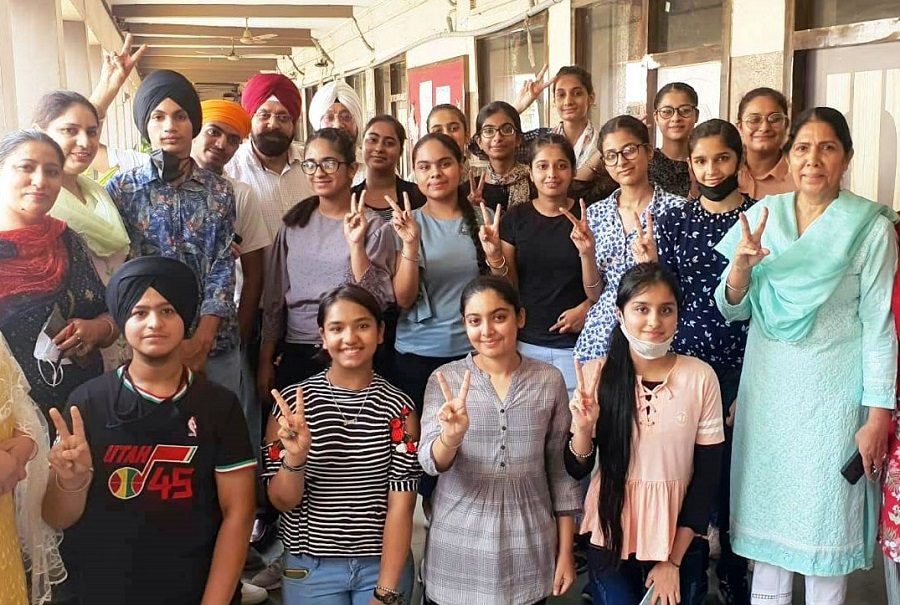 District schools reported 100 per cent results in the Central Board of Secondary Education (CBSE) Class X exams, the results of which were announced by the CBSE on Tuesday. Students and teachers erupted in joy as many students reported 90 per cent and above marks, despite academic interruptions throughout the year due to the pandemic. As students celebrated their achievement, teachers were happy that the uncertainty had finally come to an end. As the highest score in district touched 99.8 per cent, several students came close to the mark with 95 per cent and above marks being reported from each school.

Hargun Preet Singh bagged the top position with 99.8 per cent, followed by Janesh Khurana who scored 97.6 per cent while Aarushi Chopra and Pratham Chhabra got 96.4 per cent. A total of 31 students scored 90 per cent and above. Principal Upasana Mehra said, “It was a collective effort. The devotion of teachers, the dedication of students and the support of the parents brought the desired results.”

The Millennium School achieved a 100 per cent result in the Class X exam. Stuti Arora emerged as the school topper with 97.2 per cent, followed by Sudhanshu Batra with 96.6 per cent and Hridya Sehgal, Prithvi Nayyar and Aarnavbir Singh Osahan scored 96.4 per cent each. A total of 36 per cent students have scored above 90 per cent marks and 72 per cent have scored above 80 per cent.

Kavisha Khanna, a student of Class X from Spring Dale Senior School, topped the school with 99 per cent marks. Nikhil Gupta stood second with a score of 98.2 per cent whereas the third position was secured by Snehpreet Kaur Chandi with a score of 97.8 per cent marks. Rajiv Kumar Sharma, Principal, Spring Dale Senior School, said a total of 485 students appeared for the examination of which 21 students secured 95 per cent above marks and 106 students scored the 90 per cent above. He shared that the CWSN (Children With Special Needs) too appeared in the examination and they all came out with flying colours. Four out of eight children with special needs secured 80 per cent and above and the highest among them was 86.8 per cent.

Shri Ram Ashram Public School reported top score of 97.6 per cent by Vansham Mahajan, who stood first in school. The second position was clinched by Gunin Mahajan with 97.4 per cent. Bhawika Mahajan bagged third position with 97.2 per cent. As many as 48 students got above 90 per cent.

Yatish from Bhavn SL School bagged top position in school by scoring 98.6 per cent. As many as 11 students scored 100/100 marks in different subjects individually as the school reported 100 per cent result.