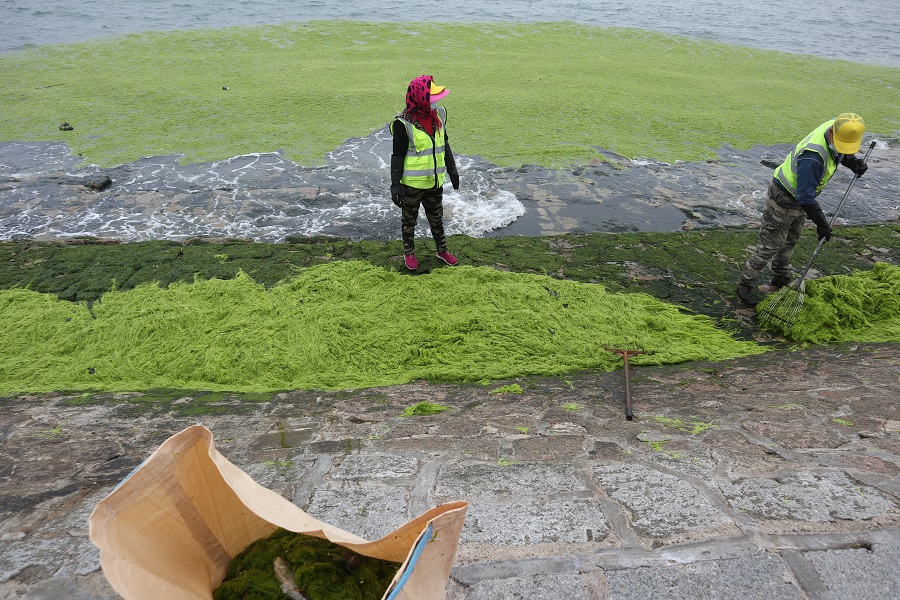 China's eastern port city Qingdao is experiencing the worst ever algae infestation in the region, with more than 1,700 square km of costal area blanketed by harmful green seaweed, also known as "green tide".

Qingdao has suffered from algae for 15 years. It normally appears from late spring and lasts for three to four months, damaging the local marine ecosystem as algae take oxygen from other organisms and churn out toxic odour while decaying.

More than 1 million tonnes of algae are expected to be removed from costal waters, state-backed China News reported on Monday, citing an expert from Institute of Oceanology at Chinese Academy of Sciences (IOCAS).

Qingdao city authorities had dispatched over 12,000 vessels to collect some 450,000 tonnes algae by last week.

Operations at Qingdao port, a major oil transporting hub, have not been affected by the algae so far.

The algae floating in Qingdao mainly comes from the Subei shoal in northern Jiangsu province, said Yu Rencheng, a researcher from IOCAS.

Since at least 2006, China's central government, coordinating with eastern province in Shandong, where Qingdao locates, and Jiangsu, had launched a campaign against the algae explosion and invested 1.99 billion yuan ($307.24 million) in 2018-2019 to support marine environmental protection.

But the algae still comes each year when temperature climbs to a level that encourages its growth.

Experts have previously said the explosion of algae follows intensive farming of seaweed in the nearby region and increasing organic matter such as nitrogen and phosphorus coming from fertilisers and residential sewage washed into the sea.

"The scale of the green has declined to a certain extend after a few years of control from the source in northern Jiangsu. But it is still relatively difficult to completely solve the problem in a short time," said Yu. Reuters