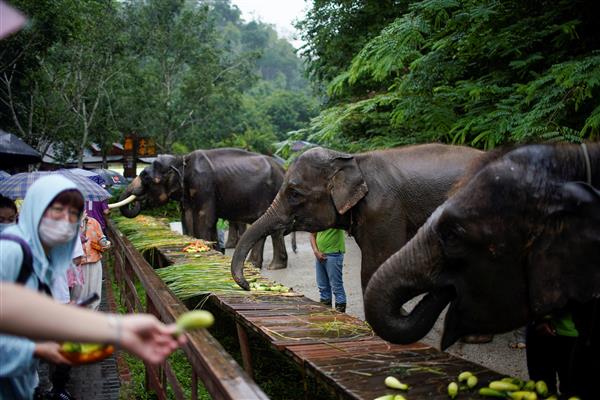 Under a footbridge in southwest China's Yunnan province, a lone female elephant makes a rare appearance at a clearing on the edge of thick forest, ignoring the heavy rain and the gathering crowds to graze and bathe in the chocolate-coloured water.

Usually, visitors hoping to spot the animals should wait until February or March, when the females are seeking mates, said Qin Ganglin, a protection officer at the Wild Elephant Valley in Yunnan's Xishuangbanna region, on the border with Laos and Myanmar.

"They don't come out very often right now, and only sporadically," he said.

Human interactions with the typically elusive elephants have come under fresh scrutiny after a herd of 16 Asian elephants left Xishuangbanna last year, with most of them migrating 500 km (311 miles) north to the outskirts of Yunnan's capital, Kunming, turning them into a media sensation.

How Xishuangbanna protects its elephants and natural ecosystems will also set the tone for China's overall efforts to change its relationship with nature, especially after the emergence of COVID-19 exposed the health risks that arise from habitat destruction.

Xishuangbanna's elephants have more than doubled to about 300 in the past 20 years, a sign of success in rehabilitating herds, and the migrating group was likely seeking more space, especially as the amount of land suitable for them has dwindled by 40% over those two decades.

China's National Forestry and Grassland Commission, which is responsible for habitat protection, did not respond to requests for comment, but state news agency Xinhua said this week that "preparatory work" has already begun to establish a national park in Yunnan to improve conditions for the elephants.

"We are trying to return them back to their old habitats," said Zhou Jinfeng, Secretary-General of the China Biodiversity Conservation and Green Development Foundation (CBCGDF), a non-government environmental group.

"We think the habitat is not big enough and not good enough and we need to help the elephants find a new one." A biodiversity hot spot, Xishuangbanna has drawn up "red lines" to separate humans from vulnerable ecosystems. But the expansion of monoculture farming, where fields are dedicated to single crops like tea and rubber, as well as the construction of giant transportation projects in the region, have disrupted the elephants' grazing and roaming routes.

One of the biggest disruptions is the Jinghong Hydropower Plant. Zhou of CBCGDF said the dam and reservoir has made the Mekong river, which cuts through the region, impossible for elephants to cross, further fragmenting their habitats.

"During the (environmental impact) assessment, there were some experts talking about how the reservoir would stop the elephants' migration," Zhou said. "But these comments were not included in the assessment."

State power giant Huaneng, which built the plant, did not respond to requests for comment.

Xishuangbanna residents told Reuters that elephant sightings have dwindled since 2007, when the hydroelectric plant was completed.

"They used to roam here when my parents set up home," said Zhou Hongbing, who lives on a farmstead close to the dam. "Since the hydropower plant was built they haven't been able to cross the river."

Qin from Wild Elephant Valley said it was "hard to say" what impact the hydropower plant has had on migration routes, but said it must have been a consideration when the plant was built.

He also noted that tea plantations have eroded some parts of the elephant protection zone. Extensive rubber planting throughout the region has also disrupted feeding and roaming habits.

Experts also point to Xishuangbanna's extensive reforestation efforts, which have reduced the grassland where elephants graze.

Zhou said any new national park would have to connect all the existing, fragmented elephant habitats and give elephants the room to roam and the food to forage.

"If the numbers double again within the next 50 years, we need to have plenty of room in Yunnan," he said. Reuters