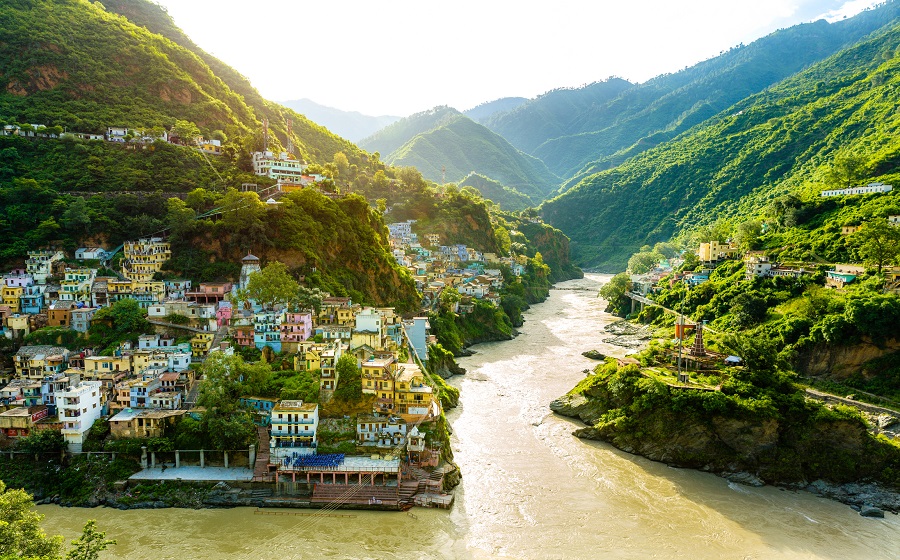 Pained at the deteriorating condition of the Ganga, ultra-marathon runner, explorer, author, and marathon coach Atul Kumar Choukse wanted to do something and zeroed in on what best he knew -- running.

However, the 3,000 kms long marathon 'Run For The Ganges' -- that started from the Gomukh glacier near Gangotri and destined to reach the Bay of Bengal -- is not his regular fare. In this 'run', Choukse is lugging a trolley of 150 kgs tied to his shoulders and waist. A tent, medical kit, laptops, GPS equipment, sleeping bag, other survival equipment, etc., are included in the trolley and covered with a set of solar panels that he uses for charging all his equipment. Starting from November 3, he has now reached Rishikesh.

The journey is estimated to be for 90 to 100 days right till Ganga Sagar in West Bengal, the final destination of the Ganges where it meets the Bay of Bengal.

"Ganga is not only a river; it is also the soul of India. But the sad truth is that the Ganga River is facing a severe crisis due to our negligence. I am on this journey to create awareness about global warming by highlighting the consequences of the deteriorating condition of the Ganges and to draw attention towards the pollution and harmful substances such as micro-plastics filling up the stream," 34-year-old Choukse said.

And, this is not the first such adventure that this runner has embarked on.

"For the last few years, the condition of the Indian rivers has been worsening at a rapid pace. Many important rivers of India are on the verge of extinction in the near future and many small and big rivers have already disappeared. This is a severe problem we are facing currently," he said.

CEO of Crowdera, world's only 100 per cent free fundraising and crowd-funding platform, that is raising funds for this marathon, "Spreading awareness regarding the deteriorating condition of the Ganga becomes more important at such crucial times of pandemic and when the country is facing so many ailments. We need to spread the word about the measures that every individual can possibly take to conserve biodiversity and our holy rivers."

Born in Chhindwara in Madhya Pradesh, Choukse has in 2017 completed the 72 kms run at the 17,617 feet high Khardung La pass. A day after that, he also finished the 42.1-km Ladakh full marathon. He has also run the desert marathons in Thar desert, India, and Sahara in southern Morocco. IANS