Do tigers and leopards drink blood? 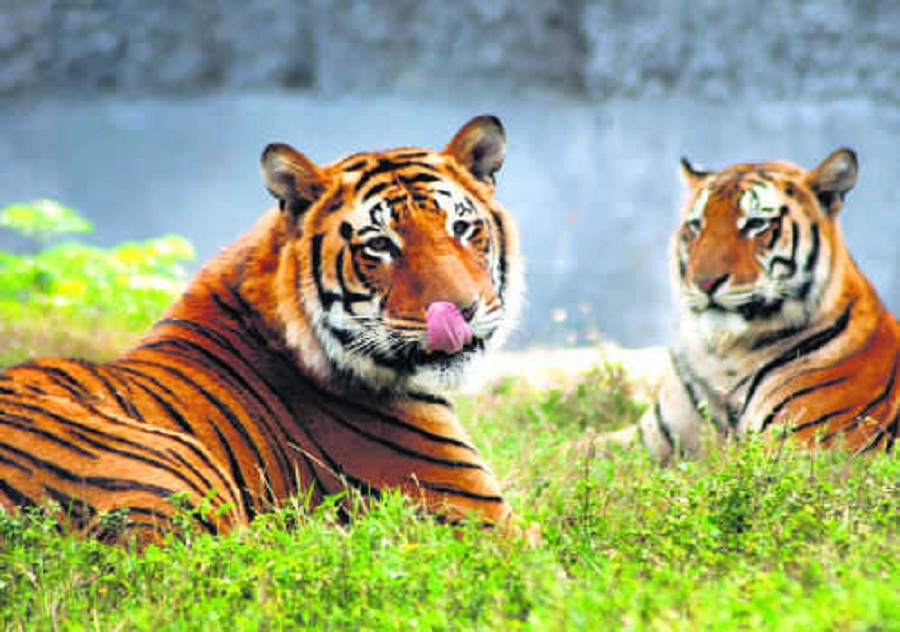 Much ink has been spent on the subject of whether a tiger or leopard sucks the blood of its prey. Most naturalists of the nineteenth century and first half of the twentieth century were of the opinion that they do. Is that true? Do these big cats first drink the blood of their victims to quench their thirst before they go ahead and devour them? First let’s get a wee bit acquainted with the tiger and the leopard to know if it’s a truth or a lie. The tiger is a richly coloured striped big cat. It can be found as high as 10,000 feet in the Himalayas as well as in steamy evergreen forests, in the grassy swamps of Terai and the muddy and watery Sunderbans, where it leads an almost amphibious life.

Tigers hunt between sunset and dawn and sometimes on cloudy days as well, when it’s not that bright. It can kill large animals like female or young elephants, gaurs and wild buffaloes. If there is nothing to eat, it kills and eats smaller animals, and even dead ones!

Tigers love water! In spite of their heavy build, they are amazing swimmers. The movement of tigers and leopards depends on the season and availability of prey.

In the monsoons, water is available everywhere and the prey scatters. The cats also wander in search of prey. In the summers, water is restricted to a few waterholes and streams, where the prey concentrates.

In a lifespan of approximately twenty years, around two are spent with their mum. Both leopard and tiger cubs are born blind and helpless. The mum carries them with her teeth, holding the loose skin on their neck whenever they wander away from the lair. Domestic cats do the same. Once they’re six months old, the cubs accompany the tigress on hunting trips. If the tigress is a cattle-lifter or a man-eater, the cubs may learn the same things.

Tigers, like leopards, hide their kill if they can’t finish eating the larger animals at once. Sometimes they hide it in boulders, sometimes in bushes or under leaves and grass if there is no other place to hide it. A panther may even lift the kill and hide it in a tree.

The earliest known fossils of the tiger are from the New Siberian Islands. Tigers migrated from the north and reached the Himalayas first and colonized the mountains. But it seems they were too late in reaching the southern tip of India. The fact that they couldn’t reach Sri Lanka suggests that the land bridge that once connected the island to India was no longer there.

There are many folklores and legends about tigers. Humans have worshipped them. When a man is killed by a tiger, a redpainted stone, like a small deity, is placed at the spot. People worship it so that they don’t meet the same fate.

According to another common belief, the spirit of the killed person rides the tiger that has killed him or her. The spirit warns the tiger of approaching danger.

Tigers are illegally killed not only for their skin, but also for some nutty beliefs: Leopards are lanky, yes. And that’s why many people confuse them with cheetahs. But these are two different cats. The cheetah is sleeker in built, and has black solid spots as opposed to the black rosettes of the leopard and runs and chases the prey, unlike a leopard, who stalks and attacks.

The leopard is a sleek, short-haired cat. Its fur is shorter and paler in the desert and longer in the snow leopard found in Kashmir. This cat is found all over the country and can live in any climate—dry, humid, hot or cold. It doesn’t have the many requirements that tigers have to live comfortably. It can live in open country and among rocks and shrubs too.

Leopards can hunt by day (if they can’t at night) and survive on deer, birds, reptiles, crabs and even mice. If they live near human settlements, they also feed on cattle and dogs. They breed all year round.

Naturalists have written a lot to establish that these cats don’t suck blood. But why did this false notion come into being? Raza spent some time thinking about it and observed the hundreds of leopards that he has come across in the wild. He finally came up with this list: