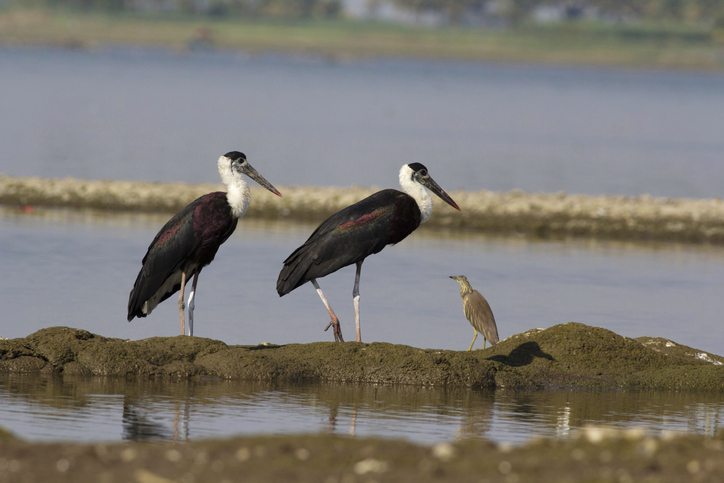 In a first-of-its-kind research study for this poorly studied species, ornithologists discovered the woolly-necked stork prefers irrigation canals over wetlands.

They found a rather large breeding population in Jhajjar and Rohtak districts of Haryana. These districts have witnessed agriculture for over a century, with the Western Yamuna canal network established before the era of the Mughals. Along with densely populated villages and towns, most of the areas in these two districts are crop fields, watered both by rainfall and the incredibly high network of irrigation canals.

"Our work on nesting woolly-necked storks published in a paper was conducted between 2016 and 2020 where we located 298 nests of this species -- the largest data set in the world for this species," lead researcher K.S. Gopi Sundar, also Co-chair of the IUCN Stork, Ibis and Spoonbill Specialist Group, told IANS.

"We analysed this information assuming the storks in Haryana would conform to patterns of nest location that have been observed in storks globally, including the single nesting stork species in Europe and China."

Rather than locating their nests on the relatively large tree patches there, they entirely nested on either single trees in crop fields, or on the row of agro-forestry trees planted along irrigation canals, he said.

"They were entirely indifferent to trees beside wetlands -- habitats that we assumed would be high quality foraging areas and therefore preferred by these storks. One universality is that they always nested far from human habitation, be it villages, or towns, or large cities. Clearly, the burgeoning urbanisation in Haryana would not augur well for the woolly-necked storks," Sundar said.

Another surprise for the ornithologists was that the studied woolly-necked storks have the largest number of chicks hatching and surviving of any stork species known in the world. Large brood sizes are a sign of the health of the landscape indicating that these large birds are finding literally kilos of insects, amphibians, reptiles and other animals every day on the farmlands.

That so much productivity exists amid crop fields to support a large waterbird is very heartening news given the gloom and doom that shrouds agriculture as being a primary agent of biodiversity declines. "We need to evaluate crop fields differently in different areas, and we should not be assuming that crowded areas such as Jhajjar and Rohtak will be uniformly detrimental to wildlife," he said.

Storks are large birds that have attracted enormous mythological and scientific attention over centuries. The storks nesting on chimneys in Europe are considered an omen of good luck.

The migration of some stork species is celebrated each year as some of the most fantastic animal movements across the globe. Amid all this enthusiasm, there is also a global research that is looking into the nitty-gritty of the conservation requirements of the various stork species.

The research has largely focused on stork species that nest in large colonies -- like the painted stork of the world-famous Keoladeo National Park in Bharatpur.

Experts say such colonies have been relatively easy to find due to their being noisy, while also being important since a few colonies could contain the majority of breeding adults of the species.

However, there are some stork species that nest alone, and are territorial. India has resident breeding populations of two of these storks -- the black-necked stork that is quite rare and possibly declining, and the poorly studied woolly-necked stork.

These storks are territorial and spread out their individual nests in the countryside, making it difficult to find nests and study nesting behaviour.

Consequently, studies on such storks are largely restricted to work in protected reserves such as Keoladeo where several pairs of both species breed each year. The vast majority of the population of single-nesting storks like the woolly-necked storks is, however, not found inside wetland reserves.

According to the experts, the new work in south Asia and Myanmar is showing that most of the birds of this species like agricultural fields.

The latest findings of the paper - 'Of irrigation canals and multifunctional agroforestry: Traditional agriculture facilitates woolly-necked stork breeding in a north Indian agricultural landscape' -- published in the open access journal 'Global Ecology and Conservation' are completely contradictory to assumptions that these birds survive only inside nature reserves and that they are declining due to the ill-effects of agriculture.

Farmers in south Asia have belief systems that are very useful for the conservation of wildlife. For one, unlike in many developed countries, farmers do not always shoot down large birds.

Also, they retain very large trees on their land like the fig trees, despite the shade of these trees likely reducing the crop yield. Fig trees have long been revered in Hinduism and are clearly not merely a construct of blind faith as they also support myriad life forms all of which are respected in this ancient belief system.

The farmers have been practicing such multifunctional agro-forestry -- planting a variety of tree species to be used in a multitude of ways -- for over a century. This practice is clearly to be supported and spread to areas where agriculture is leading to decline of waterbirds. "Our work shows that we need to be researching the various agricultural areas in the country to understand what wildlife remains within, and what aspects are helping or deteriorating conditions for individual species," said primary author of this new research Swati Kittur, who belongs to the Nature Conservation Foundation.

"Such research is likely to find conservation mechanisms that are novel to scientific literature but have been part of farmers' lives and practices for centuries," she added. Learning the farmers' ways and helping continue these ways is vitally important for a large number of wild species. The woolly-necked stork is but another species that is showing the way. IANS