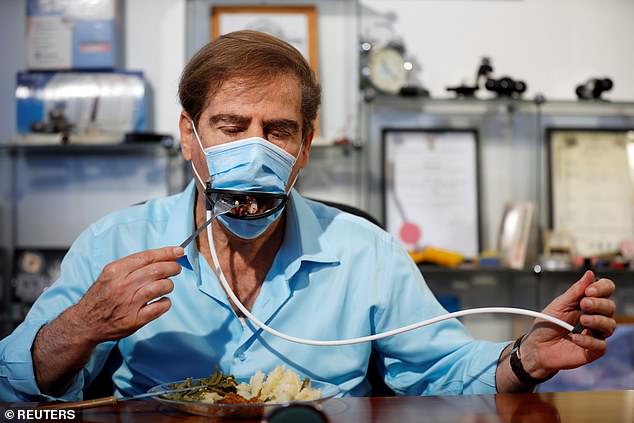 Israeli inventors have developed a coronavirus mask with a remote control mouth that lets diners eat food without taking it off, a device they say could make a visit to a restaurant less risky.

A squeeze of a lever, much like a cyclist operates a handbrake, opens a slot in the front of the mask so that food can pass through.

The process could get messy with ice cream or sauces, but more solid morsels can be gobbled up in a flash a la Pac-Man in the arcade game. "The mask will be opened mechanically by hand remote or automatically when the fork is coming to the mask," Asaf Gitelis, vice president of Avtipus Patents and Inventions, said on Tuesday as he demonstrated the device at its offices near Tel Aviv.

"Then you can eat, enjoy, drink and you take out the fork and it will be closed, and you're protected against the virus and other people sitting with you."

The process could get messy with ice cream or sauces, but more solid morsels can be gobbled up in a flash a la Pac-Man in the arcade game

The company said it plans to start manufacturing the mask within months and had already submitted a patent. It said it would likely sell at a 3 to 10 shekel ($0.85 to $2.85) premium above the price of the simple pale blue medical masks many Israelis wear.

Outside a Juice Bar in Tel Aviv, Reuters showed customers a cellphone video of the mask in action. Opinion was divided. "I think this mask, that enables me to eat while I'm still wearing it, is a must-have," said Ofir Hameiri, a 32-year-old graduate student.

But eating an ice cream cone, Ron Silberstein, a 29-year-old musician, said: "I don't think this mask could hold this kind of ice cream - it's dripping all over. I wouldn't want to wear it afterward."

Israel has largely reopened its economy after a dramatic drop in cases of the novel coronavirus. Restaurants are open only for takeout for the time being. Reuters