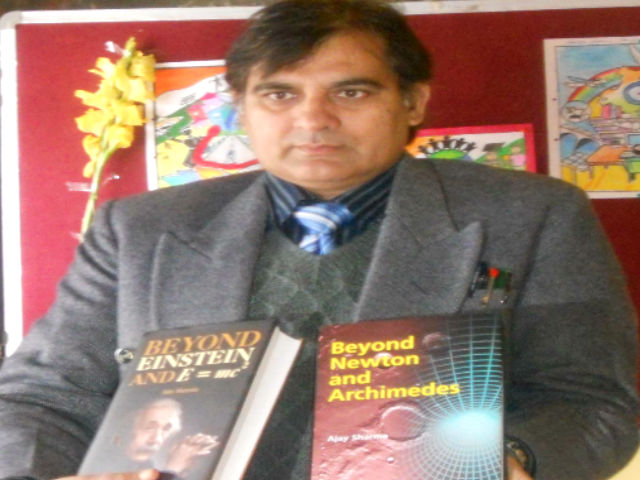 The 335 years old Newton's third law of motion can be modified as it is 'incomplete' because the action may be equal, less or more than reaction, Shimla-based researcher Ajay Sharma said on Sunday.

To experiment further and prove the biggest limitation of the law, he has written to the state government to provide a fund of Rs 10 lakh to Himachal Pradesh University here where he will carry out experiments.

His research has been theoretically confirmed by the scientific community globally but he says it is still to be confirmed experimentally.

The biggest limitation of Newton's third law is that it neglects the shape of bodies, researcher Ajay Sharma, Assistant Director for education with the state government, said.

The third law states that for every action (force) in nature there is an equal and opposite reaction. As per the researcher, the action may be equal, less or more than reaction.

In a missive to the state government on November 20, he said his experiments will be supervised by university's Department of Physics Chairman Vir Singh Rangra.

Explaining the rationale for the experiments, Sharma says the third law of motion neglects shape of bodies in physically interacting systems.

"In experiment the shape of bodies is very significant. Newton's law has been studied by billions and trillions of people in past 335 years. The law is applied right from the applications of colliding bodies to fireworks and launching  of rockets," he said.

But Sharma has pointed out by the limitation of the law theoretically in case of interacting or colliding bodies.

In a communication to Sharma by American Association of Physics Teachers President Gordon P. Ramsey in 2018, "The (your) first paper on Newton's third law of motion outlined the possibility that experiments are needed for final  confirmation up to which extent the shape and characteristics of bodies may affect the third law of motion.

"The experiments may lead to final confirmation either in original or generalised form of Third Law of Motion." According to the third law of motion, 'to every action, there is an equal and an opposite reaction'.

It is justified by simple observations, explains Sharma, that a round ball falls down due to the attraction of earth (action) and rebounds due to reaction from the floor (after interaction of the ball and the earth).

On the basis this universal observation, Newton's law is regarded as true that action and reaction are equal and opposite. It is taught to schoolchildren.

Newton's third law has not been confirmed quantitatively for any shape but regarded as true for every shape, he said. "It is not scientifically justified. This issue has been raised by me at various international fora too logically." According to 57-year-old Sharma, the law does not appear correct even in daily life in qualitative experiments involving bodies of different shapes. It's not scientifically confirmed. It has to be confirmed qualitatively in sensitive experiments.

In this case, the law can be modified as these experiments would be 100 per cent successful.

A confident Sharma, whose second book, 'Beyond Einstein and Emc2 (mass energy inter-conversion equation)', was published by the Cambridge International Science Publishers, said he has no doubt about the law modification on the basis of preliminary experiments.

In October 2019, VPS Awana, Director and Senior Principal Scientist of the National Physical Laboratory of Council of Scientific and Industrial Research in New Delhi, suggested to Sharma that the original experiments on the  third law of motion be conducted.

In July 2019, Union Minister of Science and Technology Harsh Vardhan had sent Sharma's project to the Council of Scientific and Industrial Research for funding but he's yet to get any support to prove his research. IANS