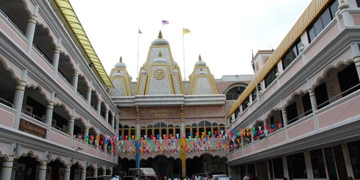 The pristine Hindu Samaj Dev Temple in Thailand is emerging as anti-Covid hub, mobilising support to help India defeat the second wave of coronavirus, which is ravaging large parts of the country.

The Bangkok-based Hindu temple, nearly 100 years old now, is rallying Indians to rush oxygen supplies to the country of their origin. The temple is coordinating with the Indian embassy as well as the Royal Thai Air Force (RTAF) in channeling oxygen equipment to India.

On May 1, the members of the temple raised enough funds to send 15 (ten litre) concentrators along with 500 oxygen masks. For the delivery, temple members sought the assistance of the Royal Thai Air Force (RTAF). The equipment has been sent to the Indian Red Cross Society.

The temple has once again mobilised devotees to send another batch of aid through the RTAF tomorrow.

In an exclusive email interview with India Narrative, Sudeep Sehgal, honorary secretary of the temple said: "After the first successful delivery, we are in the process acquiring more concentrators and will continue our support to India during this difficult time. There is flight leaving for India on 5th May with further 10 (ten litre) machines donated by the Hindu Samaj along with donations from various other Indian organizations in Thailand."

As Sehgal says: "On seeing the ravages of the Covid-19 pandemic in India, the members of our organisation felt an urgent need to help in any way it could on humanitarian grounds. Being in touch with relatives and friends of the community we learnt of the short supply of Oxygen concentrators and Oxygen tanks... which prompted our members to raise funds for this cause."