The discovery of fossil bones have provided a deeper understanding of the appearance, lifestyle and capabilities of the longest meat-eating dinosaur on record 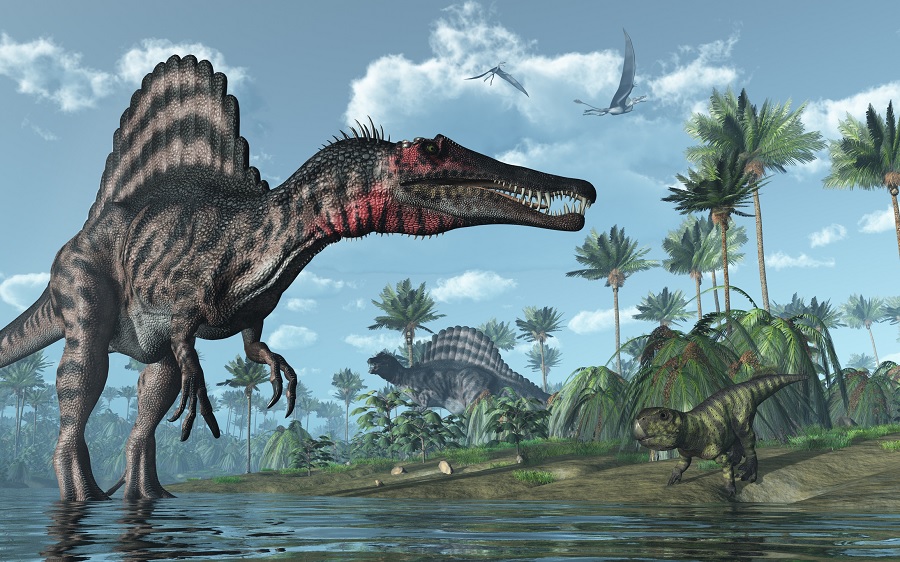 Artist's representation of a prehistoric scene with Spinosaurus and Psittacosaurus Dinosaurs. Researchers have found proof of Spinosaurus' aquatic life

The huge African predator ​Spinosaurus spent much of its life in the water, propelled by a paddle-like tail while hunting large fish — a “river monster,” according to scientists, that showed that some dinosaurs invaded the aquatic realm.

Scientists announced the discovery of fossil bones from the tail of ​Spinosaurus in southeastern Morocco that provided a deeper understanding of the appearance, lifestyle and capabilities of the longest meat-eating dinosaur on record.

“Spinosaurus had a highly specialised tail — a propulsive structure that would have allowed this river monster to actively pursue prey in the water column,” said University of Detroit Mercy paleontologist and anatomist Nizar Ibrahim, lead author of the study published in the journal ‘Nature’.

The anatomy of Spinosaurus had remained a mystery for decades after crucial fossils were destroyed during World War II until the 2008 discovery of the Morocco skeleton, with  additional tail bones dug up since 2015.

Its tail was flexible with a large surface area thanks to a series of tall neural spines —  different from the stiff and tapering tails of other carnivorous dinosaurs like Tyrannosaurus rex — indicating Spinosaurus and its close relatives engaged in tail-propelled locomotion unlike any other dinosaurs.

Laboratory experiments in which a plastic model of the Spinosaurus tail was attached to a robotic swimming device showed that the tail could move laterally to create thrust and power the animal through water like a crocodile, said Harvard University fish biologist and biomechanist George Lauder, a study co-author.

This indicates Spinosaurus terrorised rivers and river banks as a semi-aquatic animal, not merely wading into the water waiting for fish to swim by. It may have eaten huge fish, including sharks.

“This discovery overturns decades-old ideas that non-bird dinosaurs were restricted to terrestrial environments,” said Harvard University vertebrate paleontologist and biomechanist Stephanie Pierce, a study co-author. “So, yes, we believe that this discovery does indeed revolutionise our understanding of dinosaur biology.”

Spinosaurus still was able to move on land and lay eggs there, perhaps walking on four legs rather than two like other meat-eating dinosaurs.

“But it had so many adaptations to an aquatic existence — nostrils high on the skull and further back from the tip, flat bottomed-toe bones and claws, dense and thickened bone for buoyancy control, and this newly discovered tail form — that it would have been at least as aquatic as Nile Crocodiles,” University of Portsmouth paleontologist and study co-author David Martill said.

“It just might topple T. rex,” Pierce said, “as the most famous and exciting meat-eating dinosaur.” — Reuters