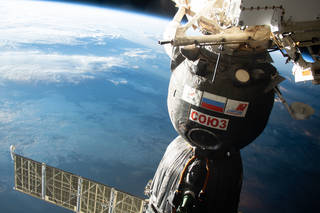 The Soyuz MS-17 crew ship that carried the Expedition 64 crew to the International Space Station on Oct. 14, 2020, is pictured docked to the Rassvet module. The orbital complex was above the Atlantic Ocean in between the island nation of Cape Verde and the African nation of Mauritania. Credits: NASA

Three International Space Station (ISS) residents will take a spin around their orbital neighbourhood in the Soyuz MS-17 on March 19, relocating the spacecraft to prepare for the arrival of new crew members.

Expedition 64 Flight Engineer Kate Rubins of NASA and Commander Sergey Ryzhikov and Sergey Kud-Sverchkov, both of the Russian Space Agency Roscosmos, will undock from the Earth-facing port of the station's Rassvet module and dock again at the space-facing Poisk docking port, NASA said in a blog post on Friday.

The relocation will free up the Rassvet port for the docking of another Soyuz vehicle, designated Soyuz MS-18, which will carry three Expedition 65 crew members to the station next month.

NASA's Mark Vande Hei and Roscosmos' Oleg Novitsky and Pyotr Dubrov are scheduled to launch to the station on April 9, from the Baikonur Cosmodrome in Kazakhstan.

This will be the 15th overall Soyuz port relocation and the first since August 2019.

Rubins, Ryzhikov and Kud-Sverchkov will return to Earth on April 17 in the Soyuz MS-17 that carried them to the space station in October 2020. IANS