It's raining stones, onions, jackfruit seeds on these Kerala houses 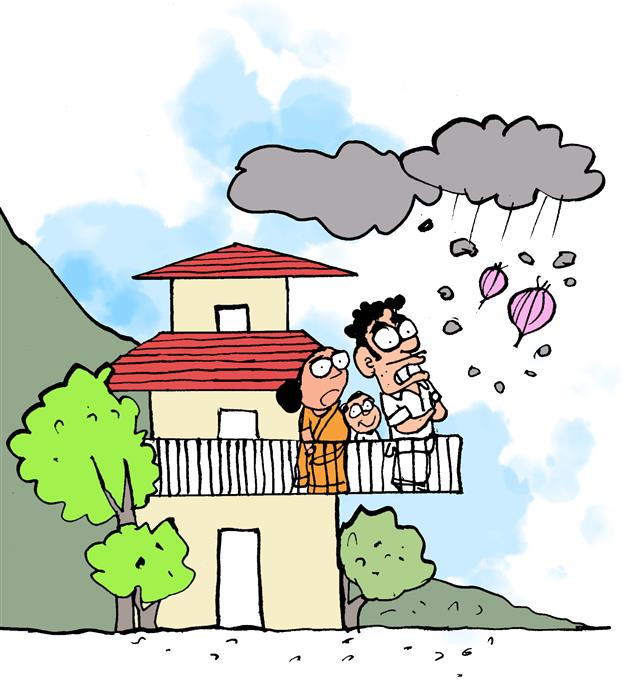 An unexplained phenomenon is taking place at two homes in the hilly district of Idukki. For the past two weeks, at the two residences of a father and son duo of Suresh and Selvaraj, it's literally raining stones, onions and jackfruit seeds.

The Upputhara residents of these two homes were first baffled alone, then it was the police and the locals turn, who first failed to believe, but when they saw for themselves, they believed.

Suresh and Selvaraj both eke their livelihood by engaging in casual labour and there are two homes in their 10 cents of land.

Suresh told IANS that their home is located on hilly terrain and it is along a slope.

"It was on July 2 that we first heard the sound of a stone falling on the roof top.

"We rushed out to see who did it but did not find anyone out there. Soon it became a regular feature and it became unbearable as it soon turned dangerous too, with stones, onions, jackfruit seeds all starting to fall on our roof top.

"When we told about this to our friends, not a single person believed, but when they came and saw, all were left stunned. Now we have moved out of the houses and today morning when we went to check the house, stones continued to fall," said a beleaguered Suresh.

Even though there are other homes in the vicinity of these two houses, so far they do not have any similar issues.

"The nearest house is about 100 metres away from ours, so far they have not reported any issue like ours," added Suresh.

Speaking to IANS, the Upputhara village council president James K.Joseph said he was surprised when he was briefed of what's happening by the father and son at their homes.

"They said stones are landing on their roof tops. I was literally surprised when they told me. Then I decided to visit their homes and I realised what the father and son have been telling is the truth. As time and again stones were seen going up and coming down and while some landed on the roof top, some others hit the side walls. One has to see it to believe it," said Joseph.

The local police officials have also visited the place and have found out for themselves. The villagers have also checked out the happenings.

"We have now moved out the two families to a different accommodation, as we felt it would not be safe for these families to remain there," added Joseph.

By now the village council have intimated this phenomenon to the Geology department and are waiting for them to come and check.